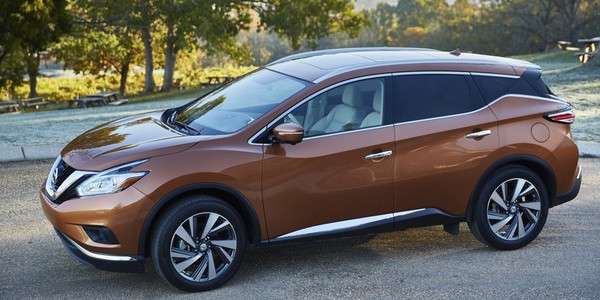 2 Reasons Why Nissan Murano is Named "Activity Vehicle of Texas"

The 2016 Nissan Murano beats some stiff competition in Texas. What 2 things pushed it to the front of the pack?
Advertisement

How did the 2016 Nissan Murano fair with auto journalists from 11 states? They came to Texas Motor Speedway to evaluate 53 vehicles in 17 different vehicle categories. They spent two days at the track and the Murano mid-size crossover walked away with the "Activity Vehicle of Texas" award given out by the Texas Auto Writers Association (TAWA).

What two things impressed journalists most about the crossover?

"Our members were impressed by the Murano as a versatile crossover in a highly competitive category," said Nicholas Phillips, president, TAWA. "Particularly, Murano scored highly for its well-executed, luxurious interior and its bold exterior styling, which pushed it to the front of the category pack.”

Murano has been on a tear recently and sales were up 51 percent in April over the previous year for the crossover. It’s the same things the journalists pointed out, that consumers are responding to. It’s Murano’s new styling outside and more luxury inside that is driving sales up. Dan Mohnke, vice president, Nissan Chief Marketing Manager & Marketing Operations says, ”Consumers have responded to Murano's bold styling and luxurious interior.”

Not the first award for Murano

Nissan Murano has received a number of awards the last two years. Nissan says the 2015-2016 Murano has won more awards over the last two years than any other SUV in its class. The crossover was also recently named as one of the "Best Cars for the Money" by U.S. News & World Report. This was the second straight year Murano won this award.

Nissan’s sedans and trucks stand out

Nissan is producing a strong lineup including their sedans. The new Nissan Altima and Maxima sedans were also judged highly at the Texas event. Both sedans took runner-up spots in the mid-size and full-size car categories respectively.

Who did Murano beat?

Murano beat out some impressive competition. It wins out over competitors in the midsize crossover segment like the performance-oriented 2016 Ford Edge, the off-road 2016 Jeep Grand Cherokee, 2016 Honda Pilot, 2016 Kia Sorento and 2016 Toyota Highlander.

Two things are impressing both consumers and journalists about the 2016 Nissan Murano. Its bold new exterior styling and its luxurious interior push it to the front of the pack. It’s why journalists voted the crossover "Activity Vehicle of Texas.”

For Some Former Daimler Managers Daimler Is Authority, While Tesla Is Like a Startup
How Daimler Unintentionally Subsidizes Tesla Giga Berlin
END_OF_DOCUMENT_TOKEN_TO_BE_REPLACED