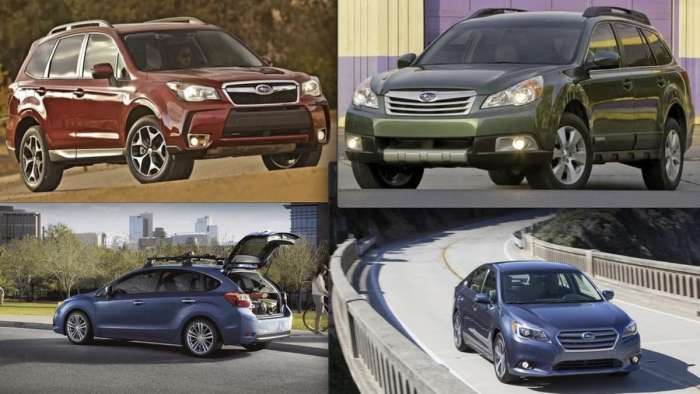 Consumer Reports identified which automakers, engines, and model years owners report adding at least a quart of oil between oil changes. You can see the complete car brand and engine list here. 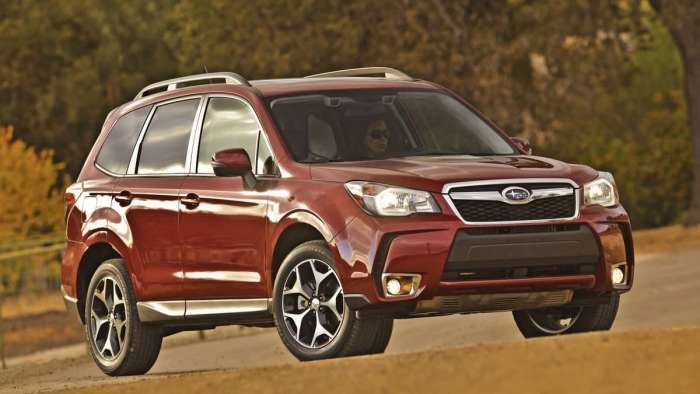 Some older Subaru Boxer engines burn oil between changes. While it's not normal, some engines have had excessive oil consumption issues, and owners report adding a quart of oil every 1000-2000 miles.

The Forester compact SUV and Outback midsize SUV are the automaker's two top-selling models. Some owners have reported to the NHTSA problems with head gasket failure. According to Consumer Reports, reliability data, and the NHTSA, oil consumption is also a potential problem you could face if you buy a used Forester or Outback with the 2.5-liter engine. 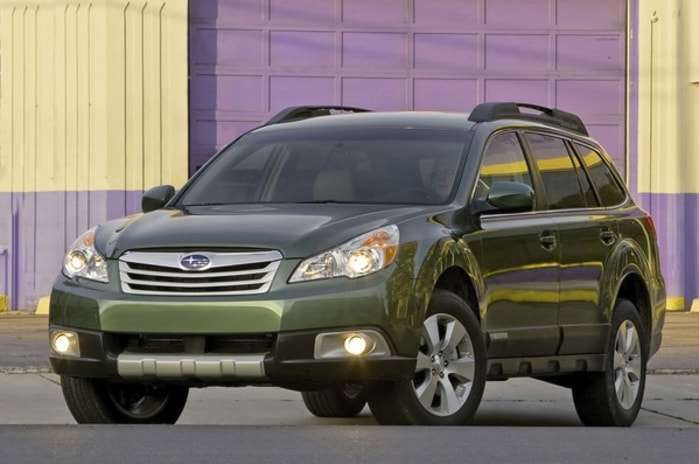 In 2016, Subaru initiating a program to extend the original new car powertrain limited warranty coverage for excessive engine oil consumption on some vehicles to 8 years / 100,000 miles from the original warranty start date.

In an earlier report, CR says the 2010-2012 Subaru Outback 3.6-liter 6-cylinder engine is also listed to burn excessive oil. Subaru discontinued the 3.6R model in the Outback and Legacy for the 2020 model year and introduced the all-new 2.4-liter turbocharged Boxer engine. There have been no problems with the new engine. 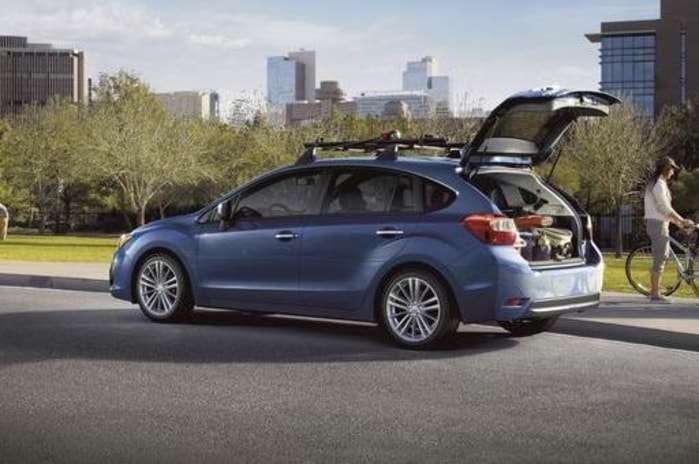 According to CR, the Impreza sedan and hatchback compact car is also plagued by poor reliability and says the 2.0-liter engine "has a propensity for oil consumption." The Impreza was included in the extended warranty program listed above, but all affected models will now be out of warranty.

The Subaru Legacy sedan used the same 2.5-liter engine as Forester and Outback and was the only engine option in Legacy models of this vintage that tended to burn oil. The worst of them are now out of warranty. 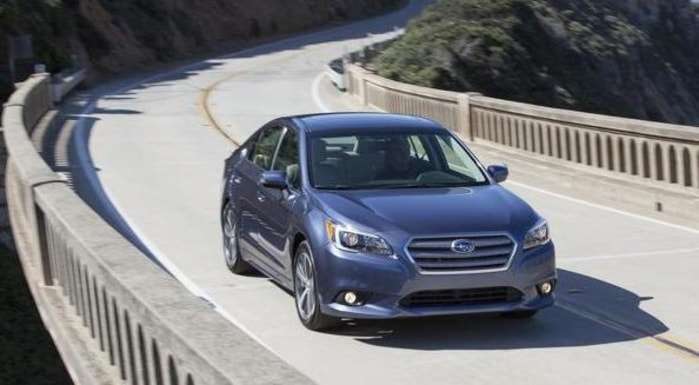 Subaru discontinued the Tribeca SUV after the 2014 model year. The Tribeca also used a 3.6-liter six-cylinder engine available in some Outback trims with oil consumption issues listed above. CR's reliability data shows that about a quarter of Tribeca owners complained of oil consumption for a few years.

Why do some Subaru engines burn excessive oil?

An earlier CR report says oil consumption issues surfaced after federal fuel-economy standards became more demanding. The mandates forced automakers to make trade-offs in engine design that would increase fuel efficiency but, in some cases, had an adverse effect on durability.

According to Consumer Reports, there were significant improvements in the four Subaru models listed above after the 2014 model year. Owners reported they were not adding oil between regular service appointments in 2015 and newer models. You can see the chart below how Subaru engines have improved after the 2015 model year. 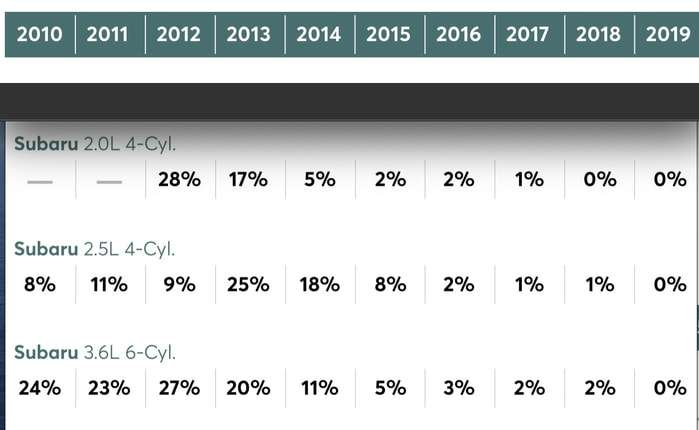 photo credit: Consumer Reports - the percentage of owners reporting adding at least a quart of oil between oil changes

Reports say the Japanese automaker redesigned the 2.5-liter engine in the Forester and Outback in 2012. Some 2012-2015 Subaru Forester models could still have the older engine design before the automaker completely changed to the next-generation 2.5-liter Boxer engine used in current models.

You Might Also Like: The Top-10 Car Brands In Customer Satisfaction - New Study Says Subaru Is Now #2

Ronald Ostromecki wrote on August 25, 2021 - 4:50pm Permalink
I drove my 2011 Outback for 103,000 miles and it used no oil. The best car I ever owned. I gave The car to my granddaughter and the record continues. I followed Subaru's maintenance schedule to the letter.
Lieven Devillé wrote on August 26, 2021 - 1:45pm Permalink
Drove a subaru forester 2015 XT for 4years and it was tuned up to 260 hp. I drove really speedy. No oil consumption whatsoever. Really a good and reliable car.
David Anderson wrote on August 29, 2021 - 3:26pm Permalink
Same here! Drove a 2014 Forester XT 80,000 miles in 6 yrs. No oil consumtion whatsoever.
Bill wrote on August 26, 2021 - 4:24pm Permalink
I drove an 11 Outback 6 cylinder 80000 miles with no problem. Current owner now has 125000, no oil usage
William Corbett wrote on August 26, 2021 - 5:02pm Permalink
I have a 2015 Subaru Forester and use synthetic oil. I have watched for excessive oil consumption for several years ever since it was first identified. Absolutely none. This has been a very reliable car. No repairs. Changed the battery. I plan to keep it for years to come.
BRIAN A. WHITE wrote on August 27, 2021 - 3:22am Permalink
2020 Impreza Sport manual transmission. Needs oil in between each service.
Daryl wrote on August 30, 2021 - 8:24am Permalink
Just bought '13 XV Crosstrek to replace a '14 that was totaled in a crash. I had the '14 for about 8 months and I noticed some oil consumption but wasn't overly alarmed. The '13 has 120k miles on it ('14 had 150k) and it goes through a ton of oil. I just did an oil change and 600 miles later the oil light is on. I'm using Quaker State 0W20 high mileage full synthetic with a Wix XP filter. This was it's first oil change since I bought the car but I added oil to it at least 3 times before the oil change. If I have a serious problem, what are my options? Reading up on this it sounds like any extended warranty coverage expired at 100k. Has anyone else dealt with this and what was the resolution?
ImprezaOwner wrote on September 3, 2021 - 10:20am Permalink
Perhaps we should identify Subarus not from the year they were made, but from the prime mechanical shortcoming that was in effect for that era. The head gasket era. The excessive oil consumption era. The bad transmission era.
Mario Hernández... wrote on September 3, 2021 - 7:38pm Permalink
Quisiera saber si se encuentra agencia aquí en CDMX y que modelos están disponibles muchas gracias por la información