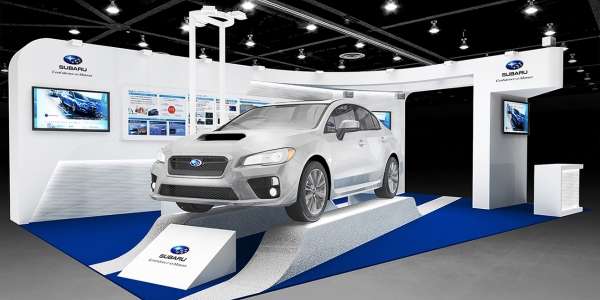 What 4 core technologies does the 2017 Subaru WRX S4 bring to Technology Exhibition 2016?
Advertisement

Subaru’s 2017 WRX S4 gets 4 core technologies for performance enthusiasts. Fuji Heavy Industries, who is changing their name to Subaru Corporation, brings the 2017 Subaru WRX S4 to the Technology Exhibition 2016 to show off those new performance technologies. The automotive technology show takes place at Pacifico Yokohama June 29 to July 1. Why is Subaru bringing the WRX to the exhibit?

In all other global markets, Subaru’s performance sedan is known as the just WRX. In Japan, it gets the S4 badge to go with it. Subaru brings the sports car to the exhibit to show four things that set the car apart. There’s four core values that Subaru and Subaru Tecnica International build into the WRX S4 sports car.

The reason why the WRX and WRX STI performance sedans are selling so well around the globe is because STI engineers build in key performance items to give performance enthusiasts a car they can drive everyday. It starts will Subaru’s all-wheel-drive system. Take this sports car out in any weather and you can have fun. It won’t have to sit in the garage on bad weather days. In fact, this is when enthusiasts have the most fun.

The Subaru brand is known for safety and WRX gets a good dose of this new technology. 2017 Subaru WRX (with Sport Lineartronic transmission) now offers Reverse Auto Braking. Blind Spot Detection/ Rear Cross Traffic Alert is now available on the base 2017 WRX STI for the first time. WRX models equipped with EyeSight now come with Steering Responsive Fog lights. This works when the fog lights are turned off and activates the left or right fog light independently, depending on the vehicle speed and steering angle. The feature provides enhanced illumination in the direction of the turn.

WRX’s 2.0-liter engine gets Wards 10 Best Engines award two year running. What impressed Wards? The WRX 2.0-liter boxer powerplant was recognized for its engineering, performance, drivability and efficiency. Chosen from a field of 37 powertrains, Ward’s editors were most impressed with the new WRX 2.0-liter’s performance. This year, the engine is one of 31 nominees and one of eight Wards Auto four-cylinder nominees for their 10 Best Engines for 2016. This year, it was the powerplant’s efficiency that caught their attention.

Last but not least is the WRX sophistication. It’s not available in the U.S. yet, but in Japan they get the upscale WRX S4 SporVita. It comes with a luxury leather interior from Italian leather maker Mario Levi. Up until now, you could get leather in the WRX, but this will take the sports car’s interior to a new level of luxury. WRX has always had a rather economy car feel, but things are changing for the rally-bred sports car. WRX S4 SporVita also gets special trim and instrument panel decorative effects that step up the luxury feel combined with the expensive leather.

These are 4 core values Subaru builds into the performance 2017 WRX S4. At the Technology Exhibition 2016, Subaru will have an underfloor camera showing the AWD system. They will also have a video running describing the new EyeSight advanced safety system technology. The 2.0-liter engine and luxury cabin round out the WRX S4 performance.