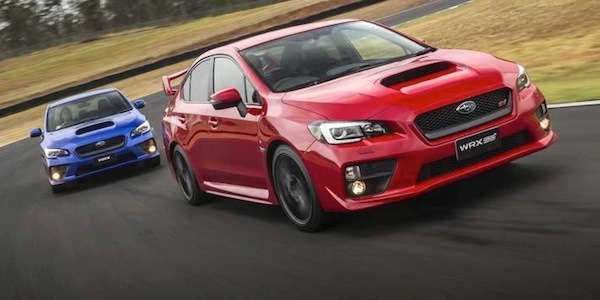 Subaru Canada is reporting the all-new 2015 WRX and WRX STI “blossomed to new levels of pure sales performance” with results up 72.1 percent for the month of July. Why are fans so excited about the new performance sedans? WRX and WRX STI enthusiasts didn’t warm up to the new styling when they saw the first images that were released from the Los Angeles Auto Show last November. But dealers are saying, as customers come in and look at and touch the 2015 WRX/STIs, its a different story now.

WRX/STI appeals to a wider audience

Back when the 2015 WRX launched, Subaru said they wanted the new WRX sedan to appeal to a wider audience, and it looks like the Japanese automaker has succeeded in attracting a new buyer to the brand. Subaru didn’t want to disappoint any of their existing customers, but were also trying to appeal to a sports oriented buyer with the new WRX/STI.

The cabin sees the most significant upgrades to appeal to a wider audience. But this didn’t alienate existing WRX/STI enthusiasts. Like WRX, the new 2015 Subaru WRX STI comes with new high-tech upgrades and a new refined interior. The new cabin is roomier and more comfortable than before. This is where the appeal to a new audience is coming from. WRX/STI features new materials and a wide array of new user technologies.

A big change is seen with its one-inch longer wheelbase over the previous-generation WRX STI. There is more legroom for taller drivers. This is impressing loyal fans too. The larger premium cabin features higher seating hip points, lower side sills and wider-opening doors that make getting in and out easier. It also features two more inches of legroom for passengers in the back and trunk capacity is increased.

And the chassis and engine upgrades to the 2015 WRX/STI make it the best-performing rally-bred WRX/STI ever produced by Subaru. WRX gets the new 2.0-liter turbo engine with 268 hp and STI comes with impressive suspension upgrades that helped it break the record at Isle of Man TT course. Shiro Ohta, chairman, president and CEO of Subaru Canada, Inc. "Our steady sales growth over the course of 2014 is proof positive that Subaru has the right product at the right time for an evolving automotive market. Consumers are expecting more from their vehicles, in terms of safety, performance and versatility, and Subaru delivers on all fronts."