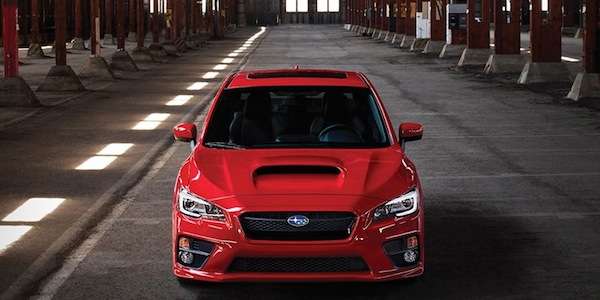 Two reasons 2015 Subaru WRX goes back to the 2.0-liter engine

2015 Subaru WRX gets a new 2.0-liter Boxer engine. What are the reasons for Subaru developing the new 2.0-liter DIT?
Advertisement

The all-new 2015 Subaru WRX is about to make its dealer launch and gets a new 2.0-liter direct-injection turbo engine. When the WRX was first introduced to the U.S. market, it came powered by a 2.0-liter turbo engine. Subaru later upgraded the WRX to get a 2.5-liter turbo. Why did Subaru drop the 2.5-liter Boxer in the WRX in favor of a smaller 2.0-liter powerplant in the new-generation model?

Subaru has thrown off the constraints of tradition and developed a new engine for the new 2015 WRX. The iconic WRX has been the focal point for performance enthusiasts since it was first introduced in 1992. Subaru adopted the name "WRX" to stand for "World Rally Cross" as all WRX versions feature rally-inspired technology, including all wheel drive, stiffened suspensions and turbocharged four cylinder engines.

The 2015 WRX gets a new powerplant that is another evolutionary step for the rally-bred performance car that has become a global automotive legend. It gets new technology that addresses two major areas. The new 2.0-liter direct-injection turbo (DIT) was built for driver performance and also environmental performance.

Changes to the Forester engine that made its way to WRX include stiffer valve springs and friction-reducing roller rocker arms in place of flat tappets. Those are combined with direct injection, high compression (10.6:1), Subaru Dual Active Valve Control System, a twin-scroll turbocharger, and an intercooler. As a result, the turbo boxer unleashes 268 hp at 5,600 rpm, accompanied by a broad torque curve that peaks at 258 lb-ft over a 2,000-5,200 rpm engine-speed range. This is an increase of 3 hp and 14 lb-ft of torque over the previous-generation’s 2.5-liter turbo.

Direct Injection (DI) is becoming more common as a highly efficient means of delivering fuel. With DI technology, fuel is injected directly into the cylinder, making it possible to cool the interior of the combustion chamber using the latent heat of fuel vaporization. Optimal air mixture for combustion near the plug is promoted using DI technology. Even when the overall air-fuel ratio inside the cylinder is low, combustion can be better controlled. What’s the major benefit? The catalyst heats more quickly during warm-up, reducing the amount of exhaust gas emitted into the air.

The 2015 Subaru WRX gets a new powerplant for two main reasons. The new 2.0-liter direct-injection turbo (DIT) was built for improved driver performance and also for environmental performance. It looks like Subaru was able to accomplish both with the rally-bred performance car’s new engine.

Dan69 wrote on June 26, 2015 - 7:14pm Permalink
DI injection technology's major benefit is more efficient due to a higher compression ratio. That is the major benefit not because the catalytic converter warms up quicker. Whatever. The author does not mention anything if Subaru managed carbon deposits that come with DI. Anyone knows anything about that?
G wrote on October 23, 2016 - 1:28am Permalink
catalyst, not catalytic converter...
Me wrote on December 8, 2016 - 8:28am Permalink
Wrong. "Catalytic" is correct
Stephen "The Money" wrote on April 17, 2018 - 12:08am Permalink
I am very interested in this as well. My 2006 IS350 was a giant POS because Toyota really screwed up their first year building the DI V6's. I have heard anything about these motors failing prematurely at all.
Nick wrote on March 18, 2019 - 11:52pm Permalink
I believe the Subaru BRZ uses port/direct injection like toyotas, and the port injectors clean the carbon deposits. The turbocharged engines in the WRX and Forester XT use direct only I think. I have an FXT with about 50k miles haven't had any noticeable issues so far.
David Siegel wrote on July 22, 2015 - 12:34pm Permalink
The higher compression ratio will probably make it harder to tune the engine with aftermarket components, particularly where folks want to upgrade the turbo to higher boost levels. Have any tuners gotten their hands on this engine yet and if so any comments?
D Von wrote on April 6, 2016 - 7:22pm Permalink
Gotten 307 whp / 315 wtq out of a stock turbo with some minor bolt ons. Its a pretty amazing engine but the calibration tuning is pretty different.
Real wrote on November 7, 2015 - 8:57am Permalink
The 2.0 engine has been a nightmare for Subaru with all the oil burning issues!!! Recall! Recall!!!!!!!!! If folks don't believe me! Check out the forums for yourself ! People who own the 2.0 are burning 3 quarts of oil between 5000 mile oil changes! Woowzah
Real wrote on December 18, 2015 - 1:29am Permalink
Your talking about the past boy, I have a 2015 WRX and its a great car with no issues, the oil burning have been fixed, get your facts straight, the FA20 engine was ranked as top 10 engines so stop trolling!
Dan morin wrote on October 29, 2016 - 9:57pm Permalink
I have 16,000 miles, tuned since 1000 miles stage 2 plus methanol injection I've never burned a drop of oil period, I change my oil regularly and check it all the time, so this is false......at least in my case
David Wetklow wrote on February 4, 2017 - 3:36pm Permalink
The 2.5 had the oil burning problem. The 2.0 turbo shows no problem so far. I have a 2015 Forester XT. Haven't had to add any oil yet..
John wrote on November 7, 2017 - 1:18am Permalink
What burning oil, i have 2015 forester xt with no loss of oil... do more research or better yet own the vehicle before trolling...
Elliot Murphy wrote on May 15, 2016 - 2:00pm Permalink
Just letting you know - the WRX never moved to a 2.5t, the WRX has ALWAYS been a 2.0t - it's the STi that has the extra half liter.
ThatGuy wrote on July 20, 2016 - 9:57am Permalink
Wrong. Look up the EJ255 Version 2, used on the 06-08 WRX, all were 2.5 liters.
Tim Mahoney wrote on October 10, 2017 - 12:41pm Permalink
Every WRX 06-14 is 2.5 turbo
Seth jeglum wrote on August 7, 2019 - 5:17pm Permalink
Wrong, I have an 07 WRX Limited, 2.5 ltr turbo EJ255 version 2. Stock 2.5 ltr with turbo.
Travis M Wetherbee wrote on December 8, 2018 - 4:03am Permalink
Yes the old 2.5 litre engines used to burn oil because the first owners of the cars didn't break the engine in correctly. I bought an '07 STi and instantly noticed the issues with oil consumption. It wasn't bad but I did my own oil changes and noticed that the cylinders had lower compression. I traded that car on a 2011 STI with basically the same motor and broke it in for the first 1,000 miles. Never had an issue with burning oil. Wife has owned to Foresters...one with the 2.5 litre and the other was the 2015 XT Premium with the 2.0 litre engine. I insisted on breaking that engine in for 1,000 miles and had absolutely no issues with oil consumption between oil changes. Anyway The oil consumption issue comes from the H4 because the oil is always present in the cylinder so it doesn't take much...like not breaking in the piston rings and making sure they are seated correctly. Anyway TL:DR but I thought I would chime in.
Johnny Quezada wrote on March 31, 2019 - 5:25pm Permalink
The previous owner didnt break it in correctly is not true. I purchased a brand new 04 STI that consumed 1 quart for every thousand miles Subaru ended by the car back from me I purchased a new 16 WRX that has 90000 miles on it now and it has consumed 1 quart of oil throughout its life