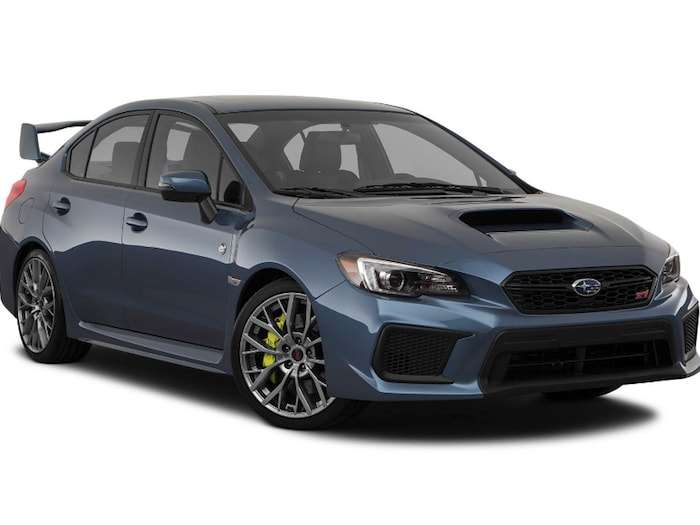 The 2018 Subaru WRX STI 50th anniversary edition comes in one color. Heritage Blue is too chic for the performance car.
Advertisement

It’s a good thing Subaru of America will only produce 200 of the 50th Anniversary 2018 WRX STIs. It comes in a new Heritage Blue exterior color we think is too chic for the high-performance STI. The new anniversary silver/blueish color looks stylishness and elegant, which is fine for the Outback, Forester, Crosstrek, Impreza, and Legacy. But not for the performance-tuned WRX STI, sport-tuned WRX, or the two-door BRZ coupe.

How about painting the new 2018 Subaru WRX STI 50th anniversary edition in a special “50th anniversary gold” exterior paint. 50 years is certainly special and it’s the “golden anniversary,” so we think the color scheme on the new WRX and WRX STI limited editions should have been gold. That would fit with traditional anniversary colors, it works with the gold wheels on the Subaru rally cars, and it doesn’t match any color in the Subaru lineup.

The Subaru of America 50th anniversary logo on the seats already has a gold star running through the 50, but the interior gets silver stitching on the seats, silver seat belts, and silver finish side mirrors on the outside. Why not have gold stitching on the black upholstery, gold seat belts with the 50th Anniversary gold logo embroidered on the front seats and carpeted floor mats.

The Anniversary editions celebrate the company’s 50 years in the U.S. and it’s a big deal for Subaru of America. They are limiting the performance lineup with 2018 WRX (600 units), WRX STI (200 units) and BRZ (250 units) for a combined total of 1,050 limited edition models.

The entire 50th anniversary edition lineup was unveiled at the Chicago Auto Show this week and runs February 10-18 for the general public to see. 50th Anniversary pricing for WRX Limited is $36,355; WRX STI Limited $42,055; and BRZ Limited $30,800. Price includes destination and delivery. The 2018 Subaru WRX, WRX STI and BRZ 50th anniversary models will be available February 15 at Subaru dealers across the U.S. in chic Heritage Blue.