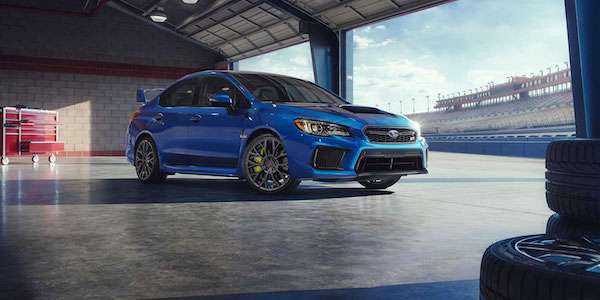 For 2018, Subaru’s WRX STI performance-tuned sedan received a performance refresh, with updated looks, improved usability both inside and outside, and enhancements for improved driving dynamics. Here’s the Canadian-spec WRX STI details and pricing.

On the inside, all trims include an updated instrument panel, center console trims, a new fold-down center rear armrest with cup holders, red seat belts, a revised gauge cluster, and a new 5.9-inch high-resolution color multi-function display with new menu screens. The STI also gets improved noise reduction throughout the cabin.

The new STI gets safer with the addition of steering-responsive headlights that improve cornering visibility by turning the direction of the lights to match the vehicle’s direction, and new LED low and high beams.

The newly-refreshed 2018 Subaru WRX STI received a performance refresh, with updated looks, improved usability both inside and outside, and enhancements for improved driving dynamics. The 2018 STI will be available in Canadian showrooms early this summer.