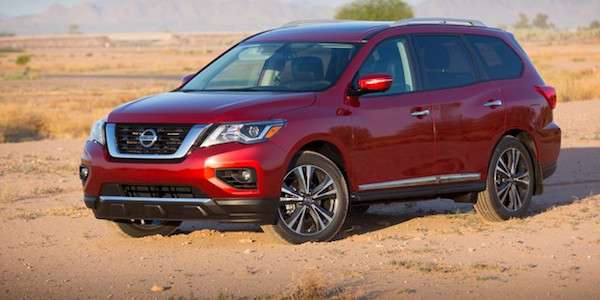 Nissan announces the 2017 Pathfinder. The big news is the new 3.5-liter engine.
Advertisement

The 2017 Nissan Pathfinder has been announced, and it gets a new engine and chassis upgrades that will make the new model better able to handle adventures away from civilization. Pathfinder seems to be going back to its roots as an multi-purpose recreation vehicle. The 2017 model is still more refined than those early years, but it gets a few new upgrades for adventure enthusiasts.

The big news for the new fifth generation Pathfinder is its new 284-horsepower 3.5-liter V6 engine with Direct Injection. That’s a 24hp bump from the outgoing model. Torque also increases from 240 lb-ft to 259 lb-ft in the new model. For those who will be towing, Pathfinder has a new 6,000-lb standard towing capacity up from the 5,000 capacity for the 2016 model.

How did Nissan engineers squeeze out the extra power? The Pathfinder’s engine has been upgraded with a new combustion chamber design, new pistons, a new air intake system, (which enhances torque and horsepower) and the new fully electronic timing on the intake side. The compression ratio has also been raised to 11.0:1 (from the previous 10.3:1). Yet, fuel economy stays the same.