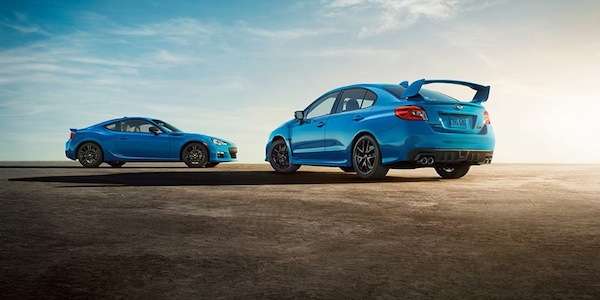 Australia will get a very limited number of the 2016 Subaru WRX and WRX STI and BRZ Hyper Blue models. How exclusive will they be?
Advertisement

They were first introduced in the U.S. to fans that attended the Wicked Big Meet in Stafford Spring, CT, and now the 2016 Subaru WRX/STI and BRZ Hyper Blue models are coming to Australia. In the U.S., performance fans will only see 700 examples of the 2016 WRX STI and 500 2016 BRZ Series.Hyper.Blue models. 2016 Subaru WRX performance sedans are not be offered in this special color and trim in North America.

In Australia, fans get a very limited number of STI’s with just 50 WRX STI Premium models being shipped down under. They will get WRX in the Hyper Blue color scheme. Australia will get 200 WRX Premiums with Lineartronic Continuously Variable Transmissions and just 50 BRZs with option pack (leather and Alcantara trim seats; heated front seats) in both manual and automatic. Subaru says the exclusive 2016 WRX, WRX STI and BRZ Hyper Blue models will be available in showrooms starting October 1.

The 300 special edition variants will likely go fast, especially the WRX and WRX STI performance sedans. Subaru Australia says sales of both the new-generation performance sedans are up 7.7 percent year-to-date to the end of July, selling at a clip similar to the late 1990s “heyday” of the Mark 1 originals.

Subaru Australia Managing Director, Nick Senior, said, “There’s always massive interest in our sports special edition versions. Combine that with their proven track record of excellent retained value, and you have every reason to get the blues.”

Pricing and specs will be announced closer to the dealer launch date, but like in the U.S., all special edition models will likely not get any engine upgrades. In Australia, standard form the WRX uses a 2.0-liter turbo boxer producing 197kW/350Nm, while the WRX STI comes with a 2.5-liter turbo developing 221kW/407Nm. The BRZ uses a 2.0-liter four-cylinder producing 147kW and 205Nm.

In the U.S., the limited edition STI and BRZ Hyper Blue models come with exclusive enhancements in the interior (you can read about here) that set it apart from the standard models. Australian 2016 Subaru WRX, WRX STI and BRZ Hyper Blue models will likely get similar features. Senior added: “The fun factor is always high with BRZ and WRX. These specials amp it up with a head-turning color scheme that only adds to their appeal.”