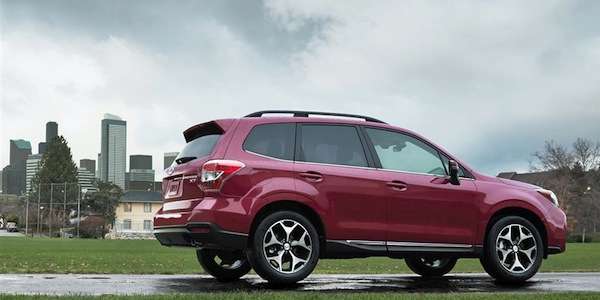 The 2016 Subaru Forester 2.0XT steps up the performance over the standard model. What sets the Forester apart even more from the competition?
Advertisement

Can a small SUV be practical, versatile, sporty and make you smile every time you drive it? Subaru has pulled this off with their best-selling vehicle in the lineup, the Forester. The Forester 2.0XT model that comes with the 250hp 2.0-liter turbocharged engine under the hood steps up the performance over the standard model. The sporty 2.0XT is more fun-to-drive and it’s highly practical for a small family. This week we test drove the top of the line 2016 Subaru Forester 2.0XT Touring model that came with extra safety features that sets this compact SUV apart from the crowd.

The 2016 Subaru Forester SUV gets several upgrades for the new model year. New for 2016, Forester models equipped with EyeSight now include Steering-Responsive Fog Lights. This added safety feature uses the pre-aimed fog lights to individually provide enhanced illumination in the direction of a turn. 2016 Forester also gets new safety and infotainment upgrades.

Where the cabin of the Forester may lack some visual appeal compared to other competitors, it makes up for it in functionality and roominess. The interior room is big for a small crossover. While others have raked roofs and a more stylish exteriors, Forester’s design gives it abundant room for driver and passengers in the front and back. Visibility for the driver and rear passengers is also excellent with its elevated seating in the back and large windows.

The interior trim is mostly matte and soft-touch surfaces and the quality is improved over the previous generation model. The information screen also gets larger in 2016 and is located at the top of a center stack with simple to operate climate and audio controls. There are enough cup holders and storage bins and they are conveniently located.

We needed to carry a large amount of cargo this week and the rear seats fold flat easily with a one-touch mechanism. With the rear seats up there is a big cargo area with 34.4 cubic feet of cargo-carrying ability. With the seats folded flat, there’s an abundant 74.7 cubic feet for carrying two mountain bikes, camping equipment or supplies from the local home improvement store.

The Forester 2.0XT is powered by a 2.0-liter intercooled turbocharged engine that produces 250 horsepower and 258 lb ft of torque. It comes coupled to a Continuously Variable Transmission (CVT) which aids fuel-efficiency. Forester 2.0XT gets an EPA estimated 23/28 city/highway mpg and 25 combined mpg. All-wheel drive is standard and XT models get an additional driver-selectable mode to improve traction on slippery surfaces and it also comes with a hill descent control.

The 2.0XT is the sports car of the Forester lineup with its turbo engine that delivers strong performance. It’s the same boxer engine that Subaru uses in their WRX performance sedan that gets tweaks to increase horsepower. We tested the small SUV in the mountains of Colorado where the XT shines in the high-altitude terrain. The 2.0-liter turbo boxer has all the power needed to pull the steep hills west of Denver leading into the mountains. We were able to easily get around slower traffic and had more pedal to spare. Forester 2.0XT Touring definitely dials up driver engagement.

Zipping around town is easy and the ride is quiet thanks to the new added insulation behind the door panels and instrument panel. For families who lead active lifestyles, the Forester XT is an all-purpose vehicle with extra ground clearance for off-road use. Forester is built for recreation and will get you away from civilization with its Symmetrical all-wheel-drive system. It also comes standard with a driver-selectable X Mode that maximizes traction in the dirt.

Forester gets high marks for safety in IIHS crash tests and this tester came with the optional EyeSight driver-assist system. The new-generation EyeSight system is effective in preventing vehicle mishaps and especially driver distracted errors. Subaru’s EyeSight is based on recognition abilities using a stereo camera system located on the top of the windshield. The system processes the images gained from its stereo camera and recognizes the object before an accident occurs.

The emergency braking system on the 2016 Forester is particularly worthy of note. Instead of slamming the brakes on at the last second, Eyesight is already slowing the car the moment an obstacle is detected. This cannot only ease the impact, but it can stop the car before it hits the stopped car in front. We tried it as we approached a light post in the parking lot to test the system out and EyeSight stopped the XT without us touching the brake pedal. Subaru reports 50 percent of EyeSight buyers have admitted that the safety system has prevented them from having a collision. Subaru’s accident rate for new registrations has halved since its arrival.

The 2016 Subaru Forester 2.0XT Touring is all about utility, versatility and sporty driving dynamics. The interior is roomy and comfortable and there is abundant room for cargo for weekend recreation. The 2.0-liter turbo is powerful and is high on the fun-to-drive meter. With standard all-wheel-drive and X Mode, this multi-purpose SUV is good for cold weather climates and will take you anywhere off the beaten path you want to go.