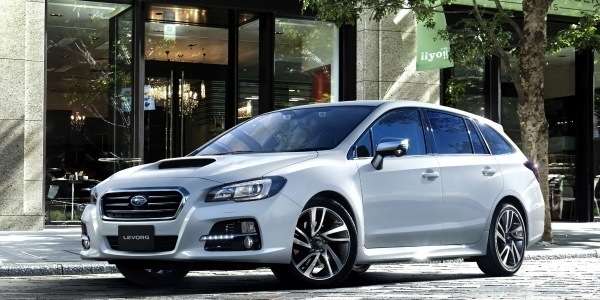 The 2015 Subaru Levorg is the first model to be equipped with the advanced safety package EyeSight version 3. What upgrades does it get from the second generation version?
Advertisement

Subaru is never standing still when it comes to making their vehicles the safest cars on the road. Their latest EyeSight version 3 is being released on the new Levorg sports tourer which Subaru currently sells in Japan and Europe. The 2015 Subaru’s sporty Levorg is the first model in the lineup to get the third generation EyeSight safety system. This "Advanced Safety Package" upgrades from the previous generation with a new rear vehicle Detection (rear side vigilance support function), a side-view monitor, high beam assist and eye site four function assist monitor.

Subaru’s goal is to become the automotive leader in overall vehicle safety, and with the deployment of this new "advanced safety package" on the Levorg, it will continue to move the brand forward to...read more.

The new EyeSight "Advanced Safety Package" uses advanced safety technology that is designed to proactively avoid accidents. The new rear vehicle Detection enables the driver to visualize blind spots in the rear and side using monitors. The new system checks blind spots in all directions around the vehicle for increased safety while driving.

The Blind spot detection function (BSD) lets the driver know when there is a vehicle approaching from the rear that can’t be seen in the outside door mirror. The radar system notifies the driver with a lit or flashing LED lamp in the mirror. The Lane change assistance (LCA) detects a vehicle in the next lane coming from behind rapidly and calls attention to the driver by turning on the LED lamp that is attached to the door mirror.

The new advanced safety package also includes a Rear Cross Traffic Alert (RCTA) that notifies the driver of a vehicle that is approaching from the right or left while backing up. If there is a risk of collision, the system the door mirror flashes and a warning sound is issued.

Subaru also has integrated an auto-dimming rearview mirror with high beam assist in the new system. The rear view mirror uses a camera that detects the oncoming vehicle and switches automatically from high beam to low beam. It also detects vehicles approaching from behind in the anti-glare rearview mirror and automatically suppresses the glare to improve safety in nighttime driving.

The safety system also displays the operational status of the functions using an "eye site assist monitor" for the driver in the windshield. The driver can check the status with less eye movement from the road ahead. This is done with a series of small lights and an alarm sounds depending on the operating conditions.

The 2015 Subaru Levorg is the first vehicle in the lineup to receive the new advanced safety package EyeSight version 3 and will release April 21 with this new safety system. Subaru says they will roll out the system and make it available as an option in more vehicles around the globe in the near future.