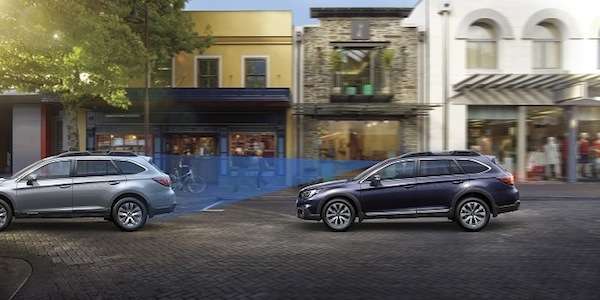 Subaru’s EyeSight safety system has won an innovation excellence award from Australian researcher, Canstar Blue. What did they say about its benefits?
Advertisement

Subaru’s new generation safety system called EyeSight is being recognized all over the globe for its superior abilities to help prevent accidents. Canstar Blue, an Australian and New Zealand researcher and expert ratings agency, has awarded EyeSight an innovation excellence award. EyeSight is offered on the new 2015 Subaru Outback and 2015 Liberty (Legacy) models in Australia.

EyeSight uses stereo cameras mounted at the top of the windshield, capturing “live” images of the road ahead. This helps the car and driver be able to react quickly to potential accidents. The safety system is designed to help prevent collisions, or reduce impact damage. It is also helping reduce insurance premiums.

Safety has always been a top priority for Subaru, and they first introduced EyeSight technology in 2012. Since its release, Subaru has received international acclaim from the IIHS in the U.S. where it achieved a maximum 6 point rating in Front Crash Prevention (FCP) tests. In 2012, EyeSight won a Japanese government science and technology award. The five Fuji Heavy Industries (FHI) engineers who developed EyeSight, received the prize for Science and Technology 2012, Development Category, from Japan’s Minister of Education, Culture, Sports, Science and Technology.

EyeSight’s safety technology in the 2015 Outback puts the driver at ease with more convenience and greater protection. The new-generation EyeSight system is effective in preventing vehicle mishaps and especially...read more.

What did Canstar Blue say?

Driver distraction is one of the biggest reasons for accidents on the road. Megan Doyle, Canstar Blue General Manager, said: “Subaru’s EyeSight could help prevent some of the needless collisions that occur on our roads every day. Subaru has created what is essentially an extra pair of eyes, alerting a driver to potential collisions and helping to mitigate the consequences of them. We applaud Subaru for its innovation and dedication to improving the safety of both road-users and pedestrians.”

The third-generation EyeSight comes standard on all new generation 2015 Subaru Outback and Liberty gasoline models in Australia. Subaru’s goal is to be the global leader in overall vehicle safety. They are well on their way to achieving this with EyeSight.

John Goreham wrote on April 15, 2015 - 9:36am Permalink
I recently tested an Imprezza with Eyesight. The system worked great and the really "imprezzive" part was the price. $26K. I Just tested two German "premium vehicles." $55k and $34K. No forward collision prevention system at all. Subaru should make this system standard and run adverts embarrassing the pretend premium brands.
John II wrote on April 15, 2015 - 7:50pm Permalink
Subaru AWD is superior than any fancy-smency brand like BMW, MB, Lexues and such. Look at youtube independent tests. All other brands are JOKE. NO, I do not work for Subaru but will buy Legacy in a year or so.
KaneS wrote on April 16, 2015 - 1:52am Permalink
I took delivery of my 2015 Outback 3.6R Limited with the tech package 2 weeks ago. Eye-Sight is amazing, was worth the 6 months wait (ordered last September). this car replaced my old 1998 Outback that I purchased new.