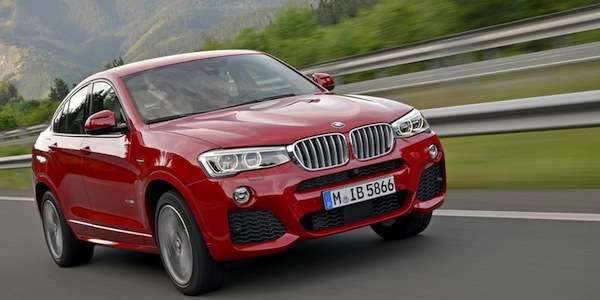 If you’ve seen the BMW X6, the new 2015 BMW X4 is a smaller version of the coupe-like crossover. The all-new BMW X4 delivers on the same theme, in a smaller, more affordable and urban-friendly package.
Advertisement

BMW has introduced the new X4 to the market and the all-new five-door crossover with coupe-like styling is available now. The 2015 X4 comes in two trim levels in the U.S., xDrive 28i and xDrive 35i. The "xDrive" moniker indicates all-wheel drive, while the numbers denote whether the engine is a turbocharged four-cylinder (28i) or a turbocharged-six (35i). This week, we are testing a Melbourne Red Metallic X4 xDrive 35i model.

BMW called the X6 sports crossover a "sports-activity coupe." The all-new BMW X4 delivers on the same theme, in a smaller, more affordable and urban-friendly package. X4 shares the same basic platform as the BMW's X3 compact crossover, but is 1.5 inches lower and wider. From the side, the X4 looks more like a sports coupe with its long hood and fastback-style roof line. Its short overhangs and 19-inch wheels that fill out the wheel wells give the X4 a dynamic stance.

Options on this X4 xDrive 35i

Stepping inside the new X4 reveals an attractive cabin design that features a wide center console giving the feel of a sporty dual-cockpit. BMW uses high quality materials inside the X4 that gives it a classy character. There was attractive metallic and wood accents sprinkled about that contributed to the quality tone of the cabin.

We were particularly impressed with the sport seats that come with the optional M Sport package. They are firmly supportive and kept us firmly planted in our more spirited driving this week. They are not so firm to be uncomfortable on a long drive. The cabin is ergonomically efficient and driver friendly with controls that are easy to use and understand.

BMW says the new X4 is a five passenger vehicle, but the new crossover will seat four adults comfortably with three across working for short trips. Rear seating is better shaped for two, but the sporty rear sloping roofline limits headroom for taller passengers. The sporty design cue also contributes to compromised rearward visibility for the driver. The optional Driver Assistance package is highly recommended as it includes parking sensors and a rearview camera. The system saved us this week when an obstructed view kept us from seeing a car in the parking lot.

Cargo space rates at about 18 cubic feet, which is around 10 cubes less than in the X3 that has a higher roof line, but that’s the price you pay for that sporty sloped roof line. The rear seats fold in a versatile 40/20/40 configuration and features 49.4 cubic feet when folded. The rear hatch gives the X4 extra versatility and cargo-carrying ability. All X4’s come equipped with a standard power tailgate and there’s a hands-free feature that opens it when you pass your foot under the bumper.

When we got behind the wheel of the new X4, we could tell it had the more powerful engine. The 300 horsepower TwinPower turbocharged 3.0-liter six-cylinder is impressive with its power delivery. We took the X4 up I-70 into the mountains west of Denver and pushed it hard. The X4 delivered impressive power even at the higher altitude going up the steep Georgetown hill. We had plenty of extra power for passing slower vehicles with more in reserve if we needed it. The twin scroll turbo spools up and provides all the power needed for all driving situations.

X4 sits up higher than some crossovers with 8-inches of ground clearance which is ideal for those taking it up into the high country for weekend excursions. The BMW X4 handles well in the corners and we experienced some body lean when taking tight mountain corners at higher speeds. The X4 is definitely athletic enough to satisfy most driving enthusiasts.

MUST SEE: Watch BMW M4 vs Toyota Tacoma in a snowy tug-of-war [video]

BMW definitely designed the X4 with the urban commuter in mind. The smaller X4 is ideal for commuting in traffic and we were able to maneuver through traffic easily and quickly during the week long drive in Denver. We encountered snow this week in the mountains west of Denver, and the X4 with "xDrive" all-wheel-drive worked well and got us through without incident.

The turbocharged six cylinder is coupled to a smooth-shifting and on-point eight-speed automatic. We used the steering wheel paddle shifters to get extra quick shifts out of the gearbox. The X4 delivered the kind of driving dynamics that are usually reserved for sports coupes. The new crossover from BMW is up high on the fun-to-drive meter. While the X4 is still an SUV, it can move and change directions quickly and confidently. Over the rough dirt roads up near Evergreen, the X4 offered a compliant yet controlled ride. On the open road, the X4 devoured the miles effortlessly and quietly making it a good choice for longer road excursions.

When you test drive the new 2015 BMW X4, you’ll find a crossover that offers spirited performance that's more sport coupe-like than sport-utility. Like the X6, the new X4 features the driving dynamics of a sport sedan, while offering additional cargo-carrying ability of a crossover. If you don’t need to carry tall passengers in the back, you won’t be bothered by the low roof line. Coupled to a smooth-shifting and on-point automatic, the turbocharged 6-cylinder packs a punch. Driving enthusiasts who need the versatility of a crossover will want to consider the X4.