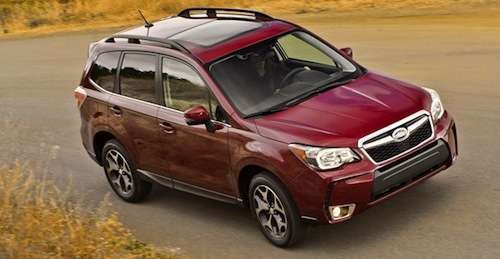 When Subaru launches the 2014 Forester in the UK next month, it will be the brands most popular model around the globe.
Advertisement

Subaru is launching the all-new fourth-generation 2014 Forester in the UK and the crossover is quickly becoming the Japanese brand’s most popular model around the globe. The new Forester goes on sale in the UK on May 1 and will be featured with a new turbocharged gasoline engine and a fuel-efficient diesel powerplant. Subaru has priced the new 2.0D diesel model very competitively and it should be a top seller in the UK. Just how popular is the new 2014 Forester and why is it Subaru’s top-selling model?

Subaru UK is reporting that last year, the Forester accounted for 170,000 sales globally. That accounts for 27% of Subaru’s total sales of its lineup around the globe. European sales of the Forester accounted for 15,000 of those total global sales last year. The new-forth-generation Forester will likely surpass those numbers as it features new all-wheel-drive capabilities, new engines and new technology.

Since the Forester was introduced in 1997, European sales in the mid-size SUV segment have increased eightfold. The Europeans have been embracing the Forester with its all-wheel-drive capability and practicality. Subaru UK says, “more now than ever, the new Forester has the ease of use and practicality that appeals to customers looking for this type of vehicle.” And this trend should continue to grow as the new Forester hits dealer showrooms on May 1.

2.0D will be most fuel-efficient model

The 2.0D X diesel variant will be the most attractively priced at £24,995 and will be the most fuel-efficient and clean Forester offered in the UK. The 2014 model 2.0-litre diesel engine returns 49.6mpg and 150g/km CO2 in the European cycle. The new UK Subaru Forester is available with the choice of either a new six-speed manual transmission (available on 2.0i and 2.0D models), or an upgraded version of Subaru’s Lineartronic CVT automatic, available as an option on 150ps petrol models and standard on vehicles equipped with the new 240ps DIT engine.

Drivers in the UK can count on improved agility, driving performance and ride quality over the outgoing Forester model. All have been improved through a combination of Subaru’s latest technologies and enhanced chassis and body rigidity. European drivers are used to vehicles that are fun and engaging to drive and the new Forester will definitely meet those desires. The new 2014 Forester is not only practical, but designed with the European driver in mind. It’s been engineered for a fun and engaging driving experience and also gets a fully-independent suspension that’s been upgraded to improve steering response, traction and ride comfort.

Customers in the UK can expect to see the all-new fourth-generation 2014 Subaru Forester diesel and petrol models to arrive in showrooms coming May 1. New Forester sales will likely climb in the UK this year as it stays the brands number one model around the globe.