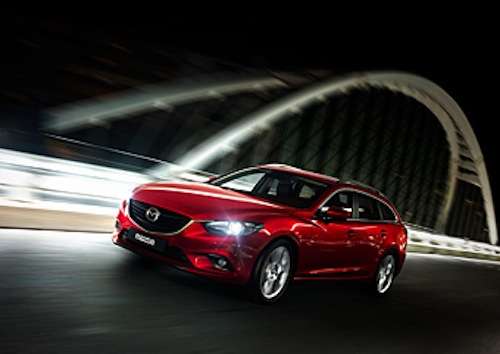 Mazda will unveil the all-new 2014 Mazda6 Wagon and Sedan at the 2012 Paris Motor Show and they will feature a new fuel-efficient diesel drivetrain.
Advertisement

Mazda is set to roll out the all-new Mazda6 Wagon at the Paris Motor Show and it will feature a new diesel engine. The new Mazda6 Sedan, currently making its debut at Moscow Motor Show, will be exhibited alongside the wagon. Both models will be featured with Mazda's new SKYACTIV-D 2.2 clean diesel engine.

Mazda is counting on the all-new Mazda6 with the new diesel option to propel the company to new sales heights. The new diesel engine option should help Mazda gain respectability around the globe. Mazda says the SKYACTIV-D 2.2-liter diesel engine is available in either Standard Power or High Power versions. The new Mazda6 will also be available with the fuel-efficient SKYACTIV-G 2.0 and 2.5 direct injection gasoline engines.

The new Mazda6 Sedan and Wagon are the second of Mazda's new generation of products which incorporate both the full range of SKYACTIV technologies and the new KODO - Soul of Motion design theme. They will both also feature a range of advanced safety technologies and Mazda's unique brake energy regeneration system, i-ELOOP. Mazda says the new brake system will respond more precisely to the driver's intentions, “while offering the class, style, quality and comfort people expect from a car in the CD segment.”

The new Mazda6 (known as the Atenza in Japan), is the flagship model of a whole new generation of vehicles that Mazda will be bringing to production in the future. Mazda is hoping the new Mazda6 Sedan and Wagon will continue the successful improvement of their brand image around the world. Now with a diesel engine, the car should gain traction in Europe.

Takashi Yamanouchi said "I am deeply moved that production of the third generation Mazda6, the flagship model of our new-generation vehicles, starts in such an important year for us. Its development represents the very best of our engineering capability and our uncompromising attention to detail. Let's all work together to promote the new Mazda6, to make it a model that gains the support of customers all over the world and leads the Mazda brand to new level."

Mazda has not given fuel mileage numbers for the new 2014 Mazda6 2.2-liter diesel engine, but more information will be released at the 2012 Paris Motor Show starting next month. The new diesel engine should prove to be very stingy on fuel. Sales of the Mazda6 Sedan and Wagon will begin in Europe later this year.

Tesla Contemplates A New Strategy for China Retail even As Sales Boom
Jay Leno on Elon Musk & EVs: “I Think He Should Get ... Credit"
END_OF_DOCUMENT_TOKEN_TO_BE_REPLACED