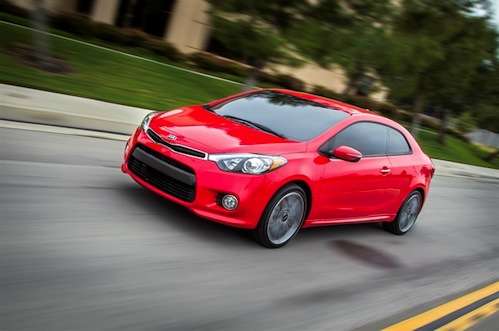 Kia is not standing still in the global compact car market and unveils an all-new turbocharged 2014 Koup SX at the New York Auto Show. The 201 horsepower turbocharged 1.6-liter engine is the most powerful Forte Koup ever to be produced by the South Korean automaker. The new Koup follows the launch of the 2014 Forte Sedan and hot new Forte 5-door SX hatch that was unveiled in Chicago. The 2014 Koup is the sportiest two-door compact to come out of Kia and shows what the automaker is capable of. Kia keeps coming out with new sporty models and the 2014 Koup exemplifies world-class styling and sportiness.

The new 2014 Kia Koup was created by the design studio at KMA’s corporate campus in Irvine, California. The design team gave the Forte Koup a sporty two-door profile, swooping roofline, and large 18-inch alloy wheels that give it an athletic stance that continues Kia’s tradition as a design leader. The new Koup is lower, longer and wider than the outgoing model.

The sporty 2014 Kia Koup comes in two trim levels, EX and the performance SX, and features two engine and transmission choices. The EX comes equipped with a 2.0-liter Gas Direct Injection (GDI) four-cylinder engine, and the performance-oriented SX comes standard with the 1.6-liter turbocharged four-cylinder. The EX comes standard with a six-speed automatic transmission while the SX comes mated with either a standard six-speed manual or optional six-speed automatic featuring steering-wheel-mounted paddle shifters.

SX is the most powerful Forte from KMA to date

The sportier SX model is powered by an all-new 1.6-liter Gas Direct-Injected (GDI) turbocharged four-cylinder engine putting out 201 horsepower and 195 lb.-ft. of torque. The advanced powertrain features double overhead cams with dual continuously variable valve timing to help improve efficiency and performance. The new powerplant will propel the all-new Forte Koup SX to new heights and make it the most powerful Forte from KMA to date. Kia is competing in the compact car segment with cars like the new 2014 Ford Fiesta ST that is the most popular car in Europe.

When its compared with the competition, it should be the fastest compact in North America. In comparison, Mini Cooper S pumps out 181 horsepower and 177 lb.-ft., while the Chevrolet Sonic RS produces just 138 horsepower and 148 lb.-ft. The new 2014 Kia Forte Koup SX should be a popular new choice in the growing performance compact segment in the U.S. and around the globe. Performance enthusiasts will definitely be drawn the Koup’s exterior styling and its new performance turbocharged engine. And to further improve performance, the Forte Koup features a sport-tuned suspension with a McPherson strut setup in front and a torsion beam rear design.

Brand awareness is being raised at Kia

“The Forte Koup is arguably the sportiest vehicle in our award-winning lineup, and it has helped raise Kia’s brand awareness significantly among automotive enthusiasts,” said Michael Sprague, executive vice president of marketing & communications, KMA. “Its rakish design, premium amenities and powerful turbocharged engine set it apart from the competition. With the debut of the Forte sedan and 5-door earlier this year, and now the Koup in New York, the Forte lineup has been completely revamped from top to bottom.”

Watch for the Forte Koup, Sedan and 5-door Hatchback to make a global impact in the compact segment. The new ultra-hot performance oriented SX is going to be one of the fastest performance compacts on the planet. Sales of the all-new 2014 Kia Forte Koup EX and SX are expected to begin in the fourth quarter of 2013, and pricing will be announced closer to the Koup’s launch.