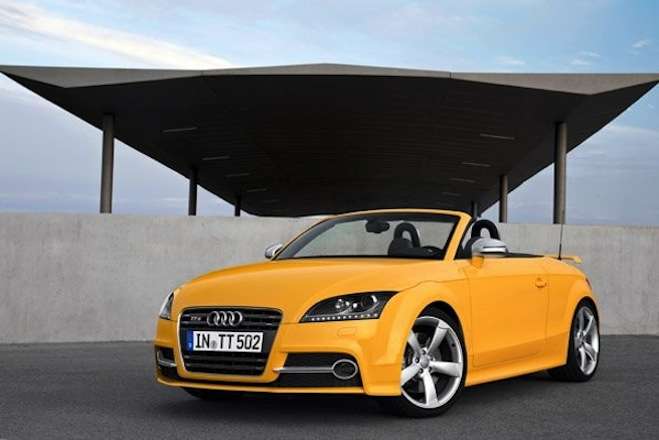 Audi will celebrate 500,000 Audi TT cars with a special edition 2014 Audi TTS Competition that will be fast and exclusive.
Advertisement

Half a million Audi TT sports cars are definitely worth celebrating and the new 2014 Audi TTS competition will be coming with high-performance and exclusivity. The first Audi TT made its debut in 1998 as a Coupe and as a Roadster the year after. Fifteen years later Audi has seen production of the 500,000th Audi TT and it gets new TTS competition Coupe and Roadster versions to celebrate.

They will begin rolling off the assembly line October 2013 with more horsepower and only 500 of the special edition models will be built making them ultra-exclusive. What sets the new Audi TTS competition apart will be the additional horsepower under the hood. All regular Audi TT variants produce 211 hp. But the 500 exclusive special edition models will feature a 2.0-liter TFSI engine that produces 272 horsepower and 258 lb. ft of torque.

When mated with the six-speed S tronic, Audi TTS competition accelerates from 0-100 km/h (62 mph) in 5.3 seconds (5.5 seconds with manual transmission). The Roadster with the six-speed S tronic sprints from 0-100 km/h (62 mph) in 5.5 seconds. With the manual transmission, it takes 5.7 seconds. All models will feature Quattro permanent all-while drive delivering power to the road. Top speed is electronically limited to 250 km/h (155.34 mph)

Unique features inside and out on the TTS

Outside, special trim accents will set the TTS competition apart from the standard models. It will be available exclusively in special paint finishes Imola yellow or Nimbus gray. A fixed rear wing with bars in matt aluminum-look finish will be its “calling card” on the exterior. Buyers can order the top in the Roadster model in either Black or Gray. 19-inch wheels will also set the TTS competition apart and will feature a five-arm “Rotor” design and are wrapped with high-performance 225/35 tires.

Inside, the special edition models will get an Impulse leather package in steel gray and uses leather bands as special trim elements. The trim edges are dyed Imola yellow, and this same shade of yellow is used for the contrasting stitching. Each TTS competition will get aluminum badges on the door trims embossed with “1 of 500” to further show the exclusivity of the sporty model.

Other interior special edition features include a leather multifunction steering wheel with a more strongly contoured rim and a rear parking system is also featured on the TTS. It also gets xenon plus headlights and Audi magnetic ride damper control system to round out the list of standard equipment in the TTS.

The 2014 Audi TTS competition is available for order now in Europe with the first special edition performance models rolling off the assembly line in October.