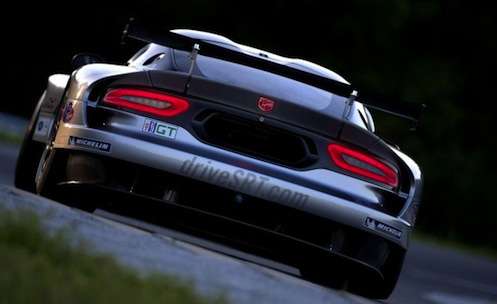 In a Detroit radio interview on Tuesday, Chrysler boss Sergio Marchionne, told listeners that Ferrari Chairman Luca Cordero di Montezemolo was left "speechless" after he got a close-up look at the 2013 SRT Viper recently. Ferrari and Chrysler are both controlled by corporate parent Fiat, and Marchionne never referred to the Ferrari chairman by name, but only by his title.

According to Motor Authority, Marchionne, in an interview with WJR-AM radio said, after Cordero di Montezemolo was given an up close and personal meeting with the brand-new 2013 SRT Viper, didn’t have words to describe the all-new supercar. Marchionne was being questioned about production of the new SRT Viper at the revamped Chrysler plant in Detroit, when he made the statement.

"The car is a superb machine. I had the chairman of Ferrari down here for the board meeting last week and he had a chance to look at the car, and he was speechless. I mean, for Ferrari to admit that the car is a unique vehicle is a hell of a compliment to the work that's gone on here. So I'm delighted. I mean, so far, knock on wood, we're doing well," Fiat and Chrysler CEO Sergio Marchionne said.

When Ralph Giles, President and CEO of SRT, and Senior Vice President of Chrysler Design, unveiled the new 2013 Viper in New York, he said the car’s power to weight ration is second only to one particular Ferrari monster. And Giles was cheered by those at the unveiling when he said they got in touch with Ferrari suppliers for the interior and that the car featured advanced materials.

The 2013 SRT Viper pumps out 640 horsepower and 600 lb-ft of torque from a 8.4-liter V-10, and has a redline of 6,200 rpm. When Giles just recently took the first SRT Viper prototype out for a spin on Detroit streets, he said, “Oh my god, what a sensation driving that car on the freeway. With the modern day cell phones everyone was almost crashing into me trying to take pictures.”

When asked at the NYIAS by Auto Blog, what it’s like to drive the 2013 SRT Viper, Gilles said, “As a driver, to me I think, it's taken me almost a decade to figure out how to drive that car, and I love driving it. But it shouldn't have to take a decade, you know? The new car, the mission for the team, was to make it so that any one can extract the best out of this car. It still has a bite to it, but it's subdued. But I'll tell you, this car is incredible, you wear this car, you don't manage it, you wear it”.

Production of the 2013 SRT Viper is expected to begin later this year at Chrysler's Connor Avenue assembly plant in Detroit.

Check out the SRT Viper video.