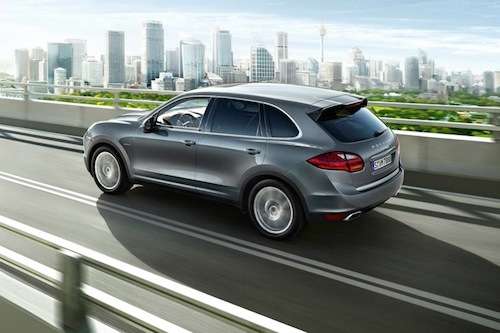 The 2013 Porsche Cayenne S will be getting a new diesel V8 engine that will give it a massive increase in torque and power.
Advertisement

Porsche has just announced they will be offering the 2013 Cayenne S with another engine option and it will be a diesel V8. The Cayenne S has always been about extra performance and power, but now the 2013 Cayenne S will get an abundance of extra torque to pull more than 7,700 pounds. Along with the extra stump pulling torque, the new engine will get excellent fuel mileage and efficiency.

Porsche offers a 3.0-liter V6 diesel with 240 horsepower and 406 lb ft of torque here in the U.S. Porsche says the V6 diesel will sprint from 0-60 in 7.2 seconds with a top speed of 135 mph. The new 2013 Cayenne S Diesel V8 will come with heightened sports performance upgrades that the S models have been known for.

The all-new Cayenne S diesel will be powered by a 4.2-liter V8 turbocharged engine producing 382 horsepower and a massive 626 lb ft of torque. That is a huge increase of 142 horsepower and 220 lb ft of torque over the 3.0-liter V6 Cayenne diesel. All that torque will now launch the 2013 Cayenne S from 0-60 mph in just 5.7 seconds with a gentleman’s agreement limited top speed of 155 mph.

Unfortunately, U.S. buyers won’t be seeing the new diesel V8 anytime soon. With the stringent EPA standards here in the U.S., it may take a few years for Porsche to get the new powerful diesel V8 approved here in the U.S. That’s too bad because the new V8 oil burner is not only powerful, but it’s fuel-efficient. Porsche claims it will get 28 mpg on the European combined cycle. That translates to 745 miles on a single tank of fuel. Contributing to the fuel efficiency the Cayenne S diesel will feature the latest fuel-saving stop-start technology.

The Porsche Cayenne is the company's best-selling model ever and has generated large amounts of cash, enabling Porsche to return to racing. To compete with the BMW X6, Porsche may also be introducing a four-door coupe version of its next-generation Cayenne and could hit showroom floors in 2016. The highly successful Cayenne currently features a Cayenne V-6, Cayenne S, Caynne S Hybrid, and the Cayenne Turbo. The pinnacle model, the Cayenne Turbo with the 500-horsepower, twin-turbocharged, 4.8-liter V-8 will go from 0- 60 mph in 4.6 seconds which puts it alongside the BMW X5 M and X6 M as the quickest, fastest SUVs in the world.

Look for the all-new 2013 Porsche Cayenne S Diesel V8 to be unveiled at the 2012 Paris Auto Show later this month.