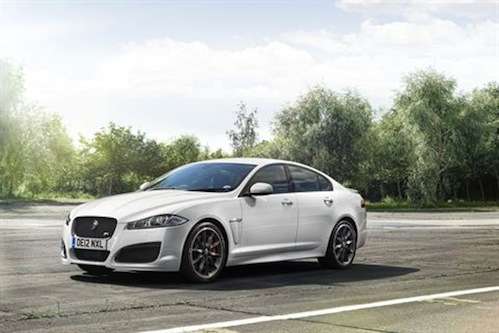 A new optional Speed Pack for the 2013 Jaguar XFR includes new performance enhancements that will produce a new top speed for the sports saloon.
Advertisement

Jaguar is trying to revitalize their core range to “reinvigorate the brand” and has introduced a new Speed Pack at the Moscow Motor Show for the 2013 XFR. The all-new Speed Pack will make the already powerful XFR sports saloon even faster. The new performance enhancements will produce a higher top speed from the previous 155 mph to 174 mph.

The Jaguar XFR is already the range-topping model in the XF sports sedan lineup and will try to compete with the Mercedes-Benz E63 AMG and 2013 BMW M5 just introduced back into the U.S. The XFR gets more aggressive exterior treatments with a front fascia with large air intakes and a wire mesh grille, functional hood vents, quad exhaust pipes, and 20-inch wheels covering larger cross-drilled rotors.

The XFR sports saloon is powered by a supercharged 5.0-liter V8 that pumps out 510 horsepower and 470 lb. ft. of torque. The Speed Pack car is fitted with a revised engine module and the transmission gets new software. The big cat will sprint from 0-60 in less than 4.5 seconds. The V8 is mated to an eight-speed automatic gearbox with paddle shifters and uses Intelligent Stop/Start for more efficiency. Jaguar says the new XFR improves by 11% with its emissions reduced by more than 8%.

In order to handle all that speed, the new 2013 Speed Pack equipped XFR gets Jaguar’s Adaptive Dynamics system. The system is able to analyze chassis movement, driver input and wheel motions up to 500 times per second. Under way, the Adaptive Dynamics system adjusts suspension settings accordingly to maintain a flat and level stance and improve handling at super high speeds on the track.

To keep the driver firmly planted in the seat, the XFR is fitted with sports seats with special “R” badges. The XFR also features the latest technology that includes a blind-spot monitoring system, touchscreen navigation with 30 GB of music storage space, Bluetooth smartphone connectivity with wireless audio streaming, adaptive headlights with an intelligent high-beam system and front and rear parking aid systems.

In addition to the Speed Pack, Jaguar unveiled its new all-wheel-drive system for the 2013 Jaguar XF and XJ at the 2012 Moscow Auto Show. Look for the all-new 2013 Jaguar AWD XF and XJ models and the XFR Speed Pack model to be available in select markets including North America, Russia, China and Continental Europe in 2013.

Tesla Contemplates A New Strategy for China Retail even As Sales Boom
Jay Leno on Elon Musk & EVs: “I Think He Should Get ... Credit"
END_OF_DOCUMENT_TOKEN_TO_BE_REPLACED