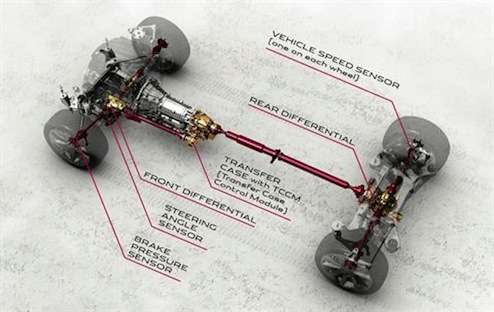 Jaguar announces major changes for the 2013 XF and XJ models as the brand introduces all-wheel-drive for the first time.
Advertisement

Jaguar will now be moving into the true performance category for the first time along with Audi, BMW and Mercedes. The two Jaguar luxury sedans will be offered with the AWD option and Jaguar says will be powered exclusively with their new 3.0-liter V6 supercharged gasoline engine. The all-new V6 will replace the outgoing naturally aspirated 5.0-liter V8 powerplant.

The new XF and XJ V6 produces a healthy 340 horsepower and 332 pound-feet of torque. Jaguar says the new engine will propel the AWD luxury sedans from 0-60 in just 6.1 seconds. The new 2013 V6 will be mated to an eight-speed automatic gearbox and will feature the fuel saving Stop/Start technology.

As we see all automakers moving away from the V8 engine, the reason is to increase their overall fuel mileage numbers. Fuel economy increases to 16/city and 25/highway for the AWD models (compared to 16/23 with last year's V-8) in rear-wheel drive models.

The new Jaguar AWD system will react to wheel-slip and enable maximum traction in all conditions. Automakers like BMW, Audi and Mercedes have known for decades that a system like this can give the driver of a performance vehicle better control in spirited driving situations. Maybe Jaguar is finally catching up in the area of driving performance now.

The new AWD system will enable the torque to be split 50:50 front/rear. Under normal driving conditions, the AWD system delivers drive predominantly to the rear wheels, providing true sports car performance, and all-wheel when the driver needs extra grip under more aggressive driving or limited traction situations. The suspension and steering has also been modified on the AWD models in order for the XF and XJ to “match their rear-wheel drive counterparts' acclaimed driving dynamics.”

It looks like the British car company is changing the direction and focus and will be giving the German automakers more competition in the future. Look for the all-new Jaguar AWD XF and XJ models to be available in select markets including North America, Russia, China and Continental Europe in 2013.

Click here to watch a technical video explaining the operation of Jaguar All-Wheel-Drive.