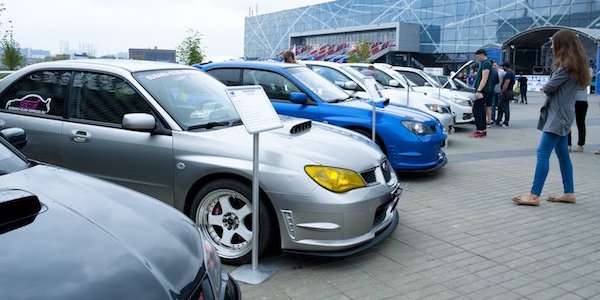 Every year, SubaFest is the largest gathering of Subaru fans in Russia. What unusual things happened in Moscow?
Advertisement

Two unusual things happened at the largest gathering of Subaru fans in Russia. This past weekend in Moscow, 5468 Subaru fans gathered for the eighth annual SubaFest 2016. Subaru Russia hosted the event and there were some unusual things that took place this year.

It wasn’t the best weekend to hold the event because of the cold rainy weather. But in spite of the weather, the crowd was 30 percent larger than last year. Besides, the weather and large crowd, a few other unusual things happened in Moscow.

A surprise couple and puppy

The highlight of the day came when a newlywed couple, George and Olesya, arrived in their Subaru Impreza and Forester. They wanted to spend their honeymoon with their Subaru friends and family. The entire wedding party was there at SubaFest, and all the fans shared in the festivities.

Something you don’t see at many cars shows, was a Mastiff puppy who became the newest Subaru fan to attend the event. The Mastiff was born at SubaFest 2016, and the new puppy was named Ermolai by their owners.

The oldest car at SubaFest was a rare 47-year-old Subaru 360, which is still running strong. This is the first Subaru car ever produced by Fuji Heavy Industries in Japan. There were only a handful shipped to Russia.

Two new exhibits included vintage Subarus for the first time. A 1994 Subaru SVX and a Subaru Leone released in February 1986 were on hand. SubaFest organizers prepared gifts, had workshops and offered test drives for the fans. An obstacle course was set up and drivers could takes their cars on a course with simulated complex traffic conditions, steep slopes, ice and rough roads to test the all-wheel-drive capabilities.

Test drives could be taken in a new 3.6-liter Subaru Outback wagon, 2.0-liter turbo Forester XT and a 305hp 2016 Subaru WRX STI. It was a SubaFest to remember with the newlyweds and a new Mastiff puppy attending the Moscow event.