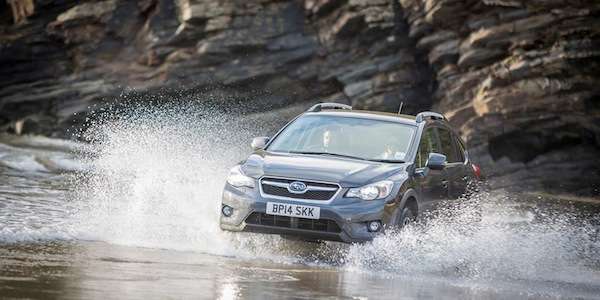 The 2016 Subaru XV Crosstrek gets new interior upgrades. What 2 things did Subaru bring to XV?
Advertisement

The UK introduced the 2016 Subaru XV and it gets an upgraded interior with higher-quality materials and a new infotainment and navigation system. The revised cabin is now more in line with Subaru’s new Forester and Outback models.

The XV interior upgrades include a higher-quality look and feel thanks to the adoption of an all new instrument panel and new metallic and piano black accents on the center console, dashboard, steering wheel switchgear and arm rests. Models equipped with Lineartronic automatic transmissions get a new shift lever and new housing with metal and piano black accents.

The redesigned LCD instrument cluster now features contemporary blue dials with new graphics. All Subaru XV models in the UK now come standard with an enhanced infotainment, navigation and audio system. A new 7.0-inch touchscreen display is at the heart and controls the advanced navigation and infotainment features, with a swipe and pinch control function for map displays.

All infotainment and climate control can be controlled through Subaru’s latest-generation voice control facility. The latest smartphone apps can be downloaded onto users’ phones or tablets, which pair-up through Starlink. They include weather and traffic reports, wireless audio, news updates and a calendar. A new 160-degree rear view camera also now comes standard.

The new XV crossover also receives an extra USB jack, allowing occupants to listen to music from one USB-compatible device while charging another at the same time. The center-console cup holders have been redesigned and now feature a sliding cover.

The upgraded 2016 Subaru XV Crosstrek goes on sale in the UK this month. In spite of all the cabin upgrades, Subaru was able to keep its existing on-the-road price, with the range starting from 21,995 British Pounds. There were also upgrades made to the XV’s chassis and driving dynamics. Get the full report here.