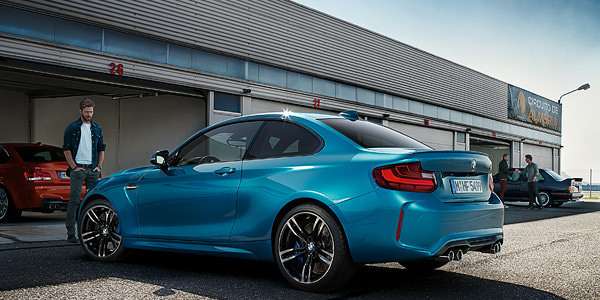 The M3 and M4 are currently BMW’s best selling M models, but that is likely to change. Will the new M2 take over the top spot?
Advertisement

The all-new BMW M2 hasn’t even been unveiled publicly yet and it’s already the most talked about M vehicle. It’s because it embodies everything that made BMW a driver-focused machine and that’s what performance enthusiasts are asking for. The M3 and M4 are currently BMW’s best selling M models, but the new M2 will most likely take over the top spot. When it’s finally launched, the M2 will be the most popular M model to come out of BMW M GmbH.

It’s not all about price, but the M2 will be positioned at a good price point for a new generation of performance buyers. The Bavarian automaker is planning to capture sales from the large millennial market in the U.S. and around the globe comprising people from diverse cultures from the 24-35 age group. BMW believes that a large percentage of this target group, who have college degrees, will be able to afford the newest M vehicle. BMW Australia boss, Marc Werner recently told CarAdvice, “We see substantial volume opportunities in that price corridor.” Some sources are saying that BMW is aiming at $51,000 but we won’t know until closer to dealer launch. The M4 fetches $65,400 before options.

BMW geared up for production

Unlike the 1M that saw limited production numbers, (only 6309 units were produced worldwide), the new BMW M2 will have a long life cycle for the first generation model and will run from 2015 through 2020 according to reports. This will be in line with other M cars and will have a life cycle almost as long as any other M car. The new M2 will be built at BMW’s plant in Leipzig, Germany alongside the BMW 2 Series Coupe and Convertible, BMW 2 Series Active Tourer and the BMW 1 Series 5-door on the main line.

More than the 1M Coupe it replaces

The M2 replaces the BMW 1M Coupe and the Bavarian automaker has even said it’s the spiritual successor to the E30 M3 and the 2002 Turbo which gives it big shoes to fill. The M2 is quicker and more powerful than the 1M Coupe and it comes standard with impressive performance from the TwinPower Turbo 3.0-liter powerplant. It also features a lightweight aluminum suspension, comes with a manual gearbox with rev-matching technology, a fully variable Active M differential and high performance brakes.

The M2 features a revised version of the M235i’s six-cylinder powerplant with Twin-Scroll turbo technology, high-precision direct injection, Valvetronic, and pistons and crank bearings borrowed from the M4’s newer S55 unit. While not significantly quicker, the M2 is 3 tenths of a second faster to 0-60 and 14 seconds quicker around the Nurburgring. The M2 is heavier by 154 pounds than the 1M which is why the 0-60 times are so close. It will also feature loads of high-tech features from the infotainment system to the GoPro and Laptimer apps which is where a lot of that weight comes from.

BMW M GmbH development engineers took the best from the M3/M4 and made it lighter, smaller and more fun to drive than the M4. BMW M took the M3/M4’s newly developed 3.0 liter 6-cylinder engine and used selected internals from the high-performance powerplant. Those components include the pistons, with their top ring optimized for the use of grey-cast iron liners and the crankshaft main bearing shells. M2’s engine also gets high-performance spark plugs designed to optimally work at higher temperatures.

Because of its smaller size, the M2 should be more fun to drive on the track. The M4 weighs in at close to 3,600 pounds, the manual M2 tips the scales at 3,450 pounds. Even thought he M4 pumps out significantly more hp, when stacked against one another on the Nurburgring, the M4 only beats out the M2 by 0.6 seconds.

The new M2 will be highly modifiable. You can bet performance enthusiasts will find ways to take out some unneeded weight, add a bigger turbo and some ECU tuning, and this car will challenge the M4 at the track and will beat the M4 around the Nurburgring. All those upgrades will be cheaper than the approximate difference in price between the M2 and M4.

BMW M is giving performance enthusiasts around the globe something to get excited about. The new 2016 BMW M2 has everything a new millennial generation wants and they will be waiting in line when it makes its dealer launch next spring. Look for the new M2 to be the best selling M model.