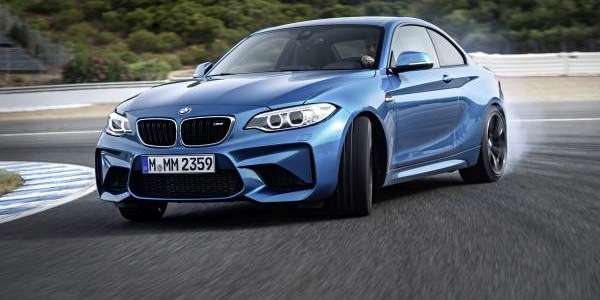 How BMW M2 rolls off the assembly line track ready

The new 2016 BMW M2 is here and it’s track-ready. How did BMW M GmbH development engineers do it?
Advertisement

The all-new 2016 BMW M2 rolls off the assembly line ready for the track for performance enthusiasts. It’s another M performance sports car that is a track weapon the second it hits the pavement. How did BMW M GmbH development engineers do it?

Effective lubrication and cooling is a necessity

To get the optimal engine performance on the track, engine components need to be cushioned by a steady film of oil and the engine has to stay cool. The M2 performance coupe’s engine stays lubricated even under severe limit-pushing driving on the track. The inline turbocharged six gets a modified oil sump that ensures oil reaches all engine components under severe track driving with sustained heavy lateral acceleration and extreme braking maneuvers.

The new M2’s inline six powerplant is kept cool with an additional oil cooler for the transmission oil when equipped with the optional M Double Clutch Transmission (M DCT), and an extra radiator for the engine. This ensures the M2 Coupe’s TwinPower Turbo 3.0-liter engine remains cool under severe track driving.

Performance enthusiasts who choose the standard six-speed manual, get a gearbox with automatic rev-matching. BMW M GmbH development engineers used a new type of carbon-fiber friction lining that enhances shift precision. An engagement speed control function blips the throttle on downshifts and lowers the engine’s revs on upshifts. This makes gear changes smoother and is ideal for hard driving on the track. The M DCT gearbox also comes with a launch control function for the optimal rpm for off the line acceleration.

If you can’t stop your performance car, the driver is in big trouble on the street or the track. BMW M took care of that issue by using high-performance brakes that were tested on the Nurburgring. The front axle gets four-piston fixed calipers with massive 15-inch diameter rotors, the rear axle uses two-piston fixed calipers with 14.5 inch diameter rotors for maximum stopping power. Both use M compound brake pads with perforated and inner-vented brake disc rings made from grey-cast iron. The performance braking system is lighter than conventional brakes, by using aluminum brake disc hubs that reduce unsprung and rotating masses.

The new M2 rolls of the assembly line equipped with M Dynamic Mode (MDM), a sub-function of Dynamic Stability Control (DSC). This reduces oversteer or understeer and loss of traction. On the track, the driver can activate the M Dynamic Mode Sport plus mode for greater control during power drifts on the track.

Last but not least, the new M2 can be equipped with optional ConnectedDrive Services with a M Laptimer app from BMW M GmbH. This allows track enthusiasts to record the M2’s speed, longitudinal and lateral acceleration, engine speed, the gear engaged at any one time, the steering angle, the accelerator position and fuel consumption. Drivers can analyze their inputs corner by corner, and can also compare laps with other drivers and data can be shared by e-mail or Facebook. The GoPro app allows M2 owners to use a GoPro camera to film fast laps at the track.

The all-new 2016 BMW M2 Coupe rolls off the assembly line spring of 2016 and it will be ready for performance enthusiasts who will take the sports car to the track. BMW M GmbH development engineers did a masterful job of producing the track-ready model. Check back tomorrow and we’ll look at how BMW M reduced weight on the new M2.