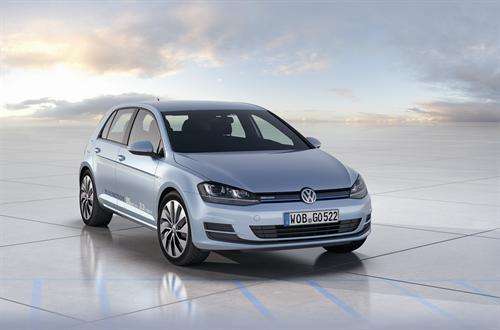 We compare the 2013 Volkswagen Golf TDI and the Nissan Sentra, which have the same MPG, to see which produces less greenhouse gas. The answer is surprising.
Advertisement

Which produces less CO2 per mile driven, a gasoline 2013 Nissan Sentra (auto) that gets 34 mpg, or a 2013 diesel Volkswagen Golf (auto or manual) diesel that gets 34 mpg? If you think you know the answer, and have a technical justification for it, please jump down to comments before reading on and type in your answer. Thanks.

So here we have two similarly sized and shaped vehicles with exactly the same fuel mileage. The only difference in terms of fuel usage is that one uses diesel and one gasoline. Which is more fun to drive? The Golf. No contest. By the way, fueleconomy.gov is our source for all mileage and emissions facts in this story.

Here is the answer: According to the EPA, the Sentra produces about 11% less CO2 tailpipe emissions. Was that your guess? The Sentra produces 263 grams per mile, and the Golf 297 grams per mile. We were surprised too. The diesel fans and marketing lobby constantly tell us that diesel produces less CO2 than gasoline powered cars. Apparently, that is not the case. What must be happening is the diesel advocates are thinking back to the “old-days” when gasoline engines had lower fuel mileage compared to diesel. Ever since the Honda Insight scouting party appeared, and then the Prius army invaded, those days have been long gone. Similar hybrids rival diesels in terms of cost and fuel economy.

What about Europe, the land of amazing fuel economy diesel cars? Look closely at the “European combined cycle” rating and realize that, although an excellent way to judge cars’ fuel usage, it is not comparable to the system we use here. Ours is just different, and a lot of people complain, too optimistic. If that is true, the European test is simply a pipe dream, and not applicable to our driving styles.

Let’s also point out right now that driving the 2013 Volkswagen Golf Diesel is a joy. Gobs of torque, superb chassis dynamics, world class handling. Downright fun and enjoyable. The Sentra is a car that one buys to fit a budget. It is a fine automobile, but you are not going to jump out of bed on Sunday morning and take the long route to Starbucks just to spend more time behind the wheel. So let’s not pretend the two are actual competitors in the sense that buyers drive them back to back and have a hard time deciding which they want.

In the world of green conscious consumers there are many sub-sets. There are affluent buyers who can, and will, spend more for an energy saving device. There are those who have a limited, but still adequate budget to make some green purchase choices, and there are those who talk the talk, but don’t really walk the walk. Our inspiration for this was a reader who does have a green products budget, and does walk the walk. He is also very savvy and he researches his overall options to ensure he uses his green budget the best way possible. He works hard for his money and wants to have the biggest positive impact while still enjoying the things he buys. He could have looked at the Golf R, which has a turbocharged 2 liter gasoline engine. That model gets 22 mpg combined and outputs 401 grams per mile of CO2 are produced. Side by side in the school parking lot both look about the same, compact and frugal. The difference between the two is talking the talk and walking the walk environmentally speaking. Practically speaking, the roads to our schools are so broken and pot-holed the Type R would likely have a bent rim and torn a tire sidewall before the lot was reached, so the Diesel is also a more livable option in the real world and arguably just as fun to drive on a daily basis.

This story should be considered in light of the fact that in any day care or school drop off line the idling vehicles are overwhelmingly maxi-vans getting 16 mpg sprinkled in with a few Chevy Suburbans getting 11 mpg, and the occasional green car which glides to the school on electrons and then shuts itself off in line using no fuel at all. Make your own green choices, but do your own research and don’t believe the past reputations about fuel economy and greenhouse gas emissions.

We will leave you with this interesting fact. Like many VW diesel owners, our reader reports much better mpg than the EPA rating. His last tank was 44.3 mpg (!), which means his CO2 emissions were dramatically better than any gas car getting 34 mpg.