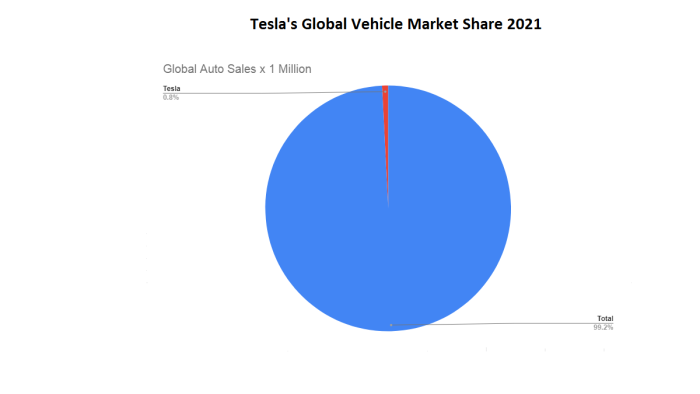 Tesla cannot build its way to any meaningful market share. If Tesla really wants to play in the big leagues it will have to acquire other automakers or buy their production capacity. Here’s why it isn't already happening.
Advertisement

Tesla is building factories like gangbusters. If you read Torque News online or if you follow our Youtube channel, you already know that our site’s owner has been tracking giga factory construction on a daily basis for quite some time. In fact, it is apparent that our coverage of Tesla’s factory construction is the most comprehensive in the industry.

Related Story: Tesla’s Current Market Share Data- Globally, In the US, In China, and In Europe

Tesla's Coming Giga Plants Are Not Enough
Once Tesla’s German and Chinese plants come online, Tesla could easily triple its delivery capacity. And Tesla has no lack of enthusiastic fans with dollars, euros, and yuan burning a hole in their pocket. Any difficulty Tesla has moving whatever it builds is quickly rectified with Tesla's short-term discounts and other sales gimmicks. No, Tesla won’t have trouble selling what it builds.

When Tesla triples its annual deliveries it will capture roughly 2% of the global vehicle market. Does that sound like Elon Musk’s end point? It sure doesn’t to us. He has ambitions to go to Mars. Musk wants to convert the world to battery-electric vehicles and stop the production of all other types of automobile propulsion, green or otherwise. Will 2% market share be enough? Or even 5%, which is more than a decade away even at the frantic pace Tesla's crews in China and Germany have bulldozed forests down for more car plants?

Tesla presently has more market capitalization funding that all of the top automobile producers combined. Many publications term this a “higher value,” compared to other automakers, though I take issue with that since market cap is only only one measurement of a company’s value. What I am smart enough to know is that having so much money you need to a frunk full of commas for the numbers is never a bad thing.

I also know that Tesla builds nearly all of the cars it has sold in America in an abandoned Toyota/GM plant. Of all places in California. Tesla is not shy about using old auto plants made new again to produce its vehicles. Why should it be? Rivian is planning the same move.

Tesla M&A Talk
I’m surely not the only one to bring up the subject of Tesla acquiring an automaker. Or two. Or three. But I’m not well versed in mergers and acquisitions. I’ve only been involved with one as a manager in my business career, though I have worked as an employee at a few that were bought out. Some of the things I have learned about them are as follows:
-Pretty much nobody outside of the owners and top managers know when talks are underway.
-To an outside observer, the merger always seems impossible.
-There is never a perfect acquisition. They are always square peg into round hole.
-Once the rumors start, they almost always are true.
-The largest efficiency gains in mergers come from job cuts.

Are Tesla's Plants Really Special?
Some other things I know are that Tesla’s manufacturing lines on Youtube vids look very impressive. But are they really that special? Is there good data on how many employees per vehicle produced Tesla uses versus say, Volkswagen or Toyota? I’m betting that Tesla could make very good use of the technology, people, machines, and production capacity that the world’s largest automakers have in place right now.

Tesla will wait until the battery supply chain picture, electric infrastructure picture, and global taxpayer support for BEVs all look a bit brighter and then make its move. Or the reverse will happen, should Tesla’s stock have a double-digit percent correction. Feel free to tell me in the comments how dumb I am, but offer your own prediction as well.

AaronTurpen wrote on January 12, 2021 - 10:21am Permalink
Actually, Tesla doesn't have the money. They have "value" via the stock market, but they don't have enough cash on hand to be negotiating a purchase of any substantial automaker.
Cj wrote on January 12, 2021 - 11:32am Permalink
Not here to argue with your post. Just asking what your opinion is on what it would cost for an acquisition? Thank you.
Mark Day wrote on January 12, 2021 - 3:58pm Permalink
Thanks for this interesting article. Tesla, to me, is a fad - like tulip bulbs. When a product can only be successfully sold with subsidies - that's me paying for someone else’s purchases - it’s not a pretty picture. Advice to Musk: Buy anything you can now – before the bubble pops
DeanMcManis wrote on January 13, 2021 - 8:12pm Permalink
Mark you need to catch up. Tesla and GM have not had any subsidies for a long time now. John, I see Tesla's ramping up speed as just right to match the rising demand for EVs. I think that in many ways it would be counter-productive to buy out some legacy brand just to get the name (which will have mixed reviews) or to get the factories (which will need to be completely refitted), or the dealerships (which make more money from service than sales, and will hate Tesla ownership). No, Tesla's advantage is working from a clean slate because they are founded on replacing all of the legacy automaker's poor design, manufacturing, and sales mistakes. It is just fine that they don't try and expand too quickly. The will grow as the EV market grows. Leading by innovation, not by mergers.
Mark Day wrote on January 14, 2021 - 8:10pm Permalink
Dean must have missed the memo: "When a product can only be successfully sold with subsidies - that's me paying for someone else’s purchases - it’s not a pretty picture. " From the Feds: "Federal Tax Credit Up To $7,500! All-electric and plug-in hybrid cars purchased new in or after 2010 may be eligible for a federal income tax credit of up to $7,500. The credit amount will vary based on the capacity of the battery used to power the vehicle. State and/or local incentives may also apply." I'm sensing a Dean McManis one-trick-pony - "It ain't a vehicle lessen it's 'lectric."
DeanMcManis wrote on January 17, 2021 - 12:24am Permalink
Mark, you do understand that Tesla and GM have not had any federal subsidies for a very long time now. Don't you?
Sigifredo Garza wrote on February 2, 2021 - 4:17pm Permalink
Dean and Mark,,,, Please..... you're both kinda right so lets back off a bit. This is not a place to start slinging mud. What most people like me will tell you is this: I have owned an electric vehicle for over 5 years now, and can't say enough good things about it. What do I think about Tesla, I think that it's not a fad, but here to stay in one form or another. Right now, Tesla is the leader and unless they water down ( diversify ) their services too much, they should be here a very long time. They may even be the first multi Trillion dollar company by 2030 or sooner. If you don't see that, then I'm OK with everyone having an opinion. It's a free country, remember?