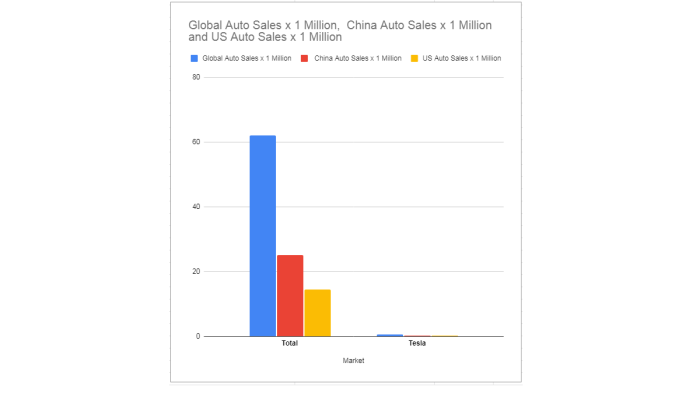 Here’s What Tesla’s Current Market Share Looks Like Globally, In the US, In China, and In Europe

We calculate Tesla’s current share of the three main global marketplaces that have adopted green vehicles. Here’s Tesla’s present-day share worldwide, in the US, in Europe, and in China.
Advertisement

Tesla recently came extremely close to reaching its year-end goal of delivering 500,000 vehicles globally in calendar 2020. The company has been investing fantastic amounts of capital into new European and Chinese facilities to build its vehicles, presumably for the markets in which those factories will reside.

Tesla fans are rightly enthusiastic about Tesla coming so close to achieving its goal. This is the second year that Tesla’s stretch goal was more or less met by its delivery volume. Investors are clearly pleased. The equivalent value of any one of its cars eighteen months ago would now make the stockholder a millionaire, or darn close.

Automobile enthusiasts rarely step back and try to see the global, or even market-wide, view of an automaker’s contribution to the total. We thought we would illustrate where Tesla stands today. This story will be fun to look back on in one, five, or ten years when Tesla’s present construction has begun to turn out automobiles.

Tesla Delivery Detail Sources
Tesla is funny about revealing where it sells its cars, and which models make up the mix. So, for just a smidge more of a breakdown, we turned to CleanTechnica. The publication is openly pro-battery electric vehicle. The author of the story who made these market breakdowns of Tesla’s sales is also CleanTechnica’s director, chief editor, and CEO. And the lucky man is also a Tesla stockholder according to his bio. So we feel that is safe to say if he is making any mistakes with regard to the numbers, they likely favor Tesla. 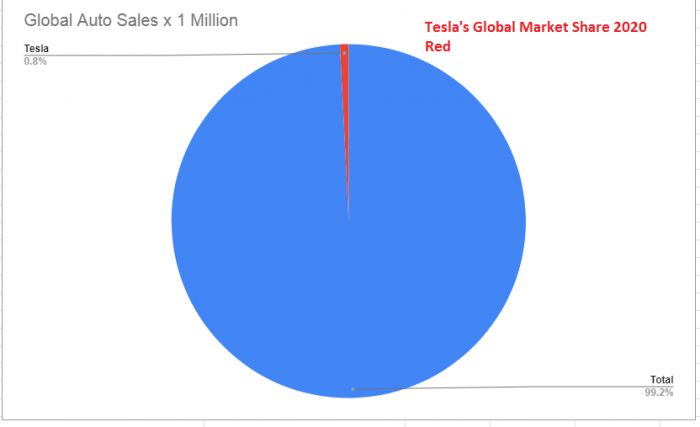 Tesla's Global Market Share Charts and Data
First a simple verbal overview of Tesla’s approximate global market share. In 2020, a flat year for the industry overall, and an up year for Tesla, the company’s market share is roughly 0.8%. Or a little less than 1% of the total automobiles produced on Earth last year. How did we arrive at that? We simply divided Tesla’s half-million vehicles into the approximately 62 million Statista says were produced. Another way to look at it is that Tesla made about 1/124th of the automobiles.

Tesla US-Market Delivery Data
The next Tesla market share number shows Tesla in a more favorable light. The American market was down in 2020 and Tesla’s US deliveries were up by roughly 6%. In the United States, roughly 14.5 million vehicles were delivered in 2020. Of those, Clean Technica estimates that Tesla was responsible for 204,000. That equates to 1/71 of the vehicles delivered in the US. And by vehicles here we specifically mean passenger vehicles. That should equate to about 1.4% of the total if our goze-intahs are right. Is one out of every 71 of the vehicles produced impressive to you? That is entirely subjective.

Tesla China-Market Delivery Data
In China, Automotive News says about 25 million new vehicles were delivered in 2020. Clean Technica estimates that Tesla was responsible for 148,349 of those units. Thus, Tesla delivered 1/168 of the Chinese-markets vehicles. If our calculator isn’t lying to us, that equates to 0.6% of the total.

Tesla Europe And Other Market Data
Europe is a bit trickier. After all, what exactly is the “European car market?” Does Turkey Count? Most of its people are in Europe, but most of its landmass is in Asia. How about Russia which has a similar oddness to it? What about the United Kingdom and Ireland? Ireland is on an island, but most of the U.K. is connected by a tunnel, but not part of the mainland of Europe. Kooky, right? We don’t know exactly what to compare Tesla’s “European” sales to. Clean Technica says this of the remaining portion of Tesla’s total global deliveries: “(Tesla deliveries in) Europe is in a solid third, at 98,995 estimated deliveries, while APAC (28,615) and Canada (22,459) complete the tally.” Sources we have seen say that the “European” car market is about 4.5 million units annually. Let’s just skip the market share part here for Tesla. It’s tiny. We will point out that Forbes had a lot of fun in December saying, “Tesla Sales Have Fallen Off A Cliff In Europe’s “Greenest” Car Markets In 2020.” You can read the author’s thoughts on that yourself.

So, having now heard what percentage of sales Tesla captures globally, feel free to throw us a comment and predict what Tesla’s global, US, Chinese, and “European” market share percentages will look like in one, five, and ten years. We would love to hear your thoughts. Feel free to work backward from total capacity under construction.

Jimmy Dinsmore wrote on January 12, 2021 - 11:03am Permalink
The hot rumor I heard was that it was GM that they had in their sights as to who to purchase.
John Goreham wrote on January 12, 2021 - 1:12pm Permalink
That would be epic.
DeanMcManis wrote on January 13, 2021 - 8:20pm Permalink
I am not sure what you intend to reveal with these sales figures. Tesla has only begun building their own EVs in China for a year, and now they just started building their 2nd EV, the Model Y. The overall world market for EVs is currently small, but it is growing rapidly. And Tesla is leading EV sales, and it poised for huge growth as Giga Shanghai expands production, Giga Berlin starts producing Europe-built Teslas later this year, and Giga Texas is finished and starts building the new Model Y and upcoming Cybertruck. This is not a growth trend that you are going to see with a microscope. It will be expanding over the next 5 years,
John Goreham wrote on January 14, 2021 - 11:56am Permalink
This story will be fun to look back on as the world market for vehicles transitions from being 97% ICE to a mix of greener technologies. And maybe eventually to BEVs. At that last point, there will no longer be an "EV market." Just a "vehicle market." What do you think Tesla's global vehicle market share will be in 1, 5, and 10 years? Today it stands at about 0.8%. After all of Tesla's underway capacity expansion is at full production capacity, how will the above pie chart look? California and Europe already have a green vehicle only target date set. Once we pass that date, what do you think Tesla's market share will be?
DeanMcManis wrote on January 15, 2021 - 3:24am Permalink
With a change in administration I think that the market for all EVs will improve this year in the U.S. and perhaps federal subsidies will return for GM and Tesla. I think that the next gen Model Y, Model 3, and Cybertruck will more than double U.S. Tesla sales this year. And China built models combined with European built models will be met with the even higher EV demand in those countries, also doubling sales there. And for 2022 I think that the smaller $25K Tesla will again spur huge growth worldwide over the next 3 years. I think that EV sales will be growing well before the CA, Europe, and Japanese ICE engine cutoff dates, and I anticipate EV sales to pass 15% of new vehicle sales worldwide by 2025 (4 years), and pass 35% by 2030.
Rockclimber wrote on February 8, 2021 - 5:23pm Permalink
In Tesla's most recent shareholder deck released for Q4 2020 earnings call in January it says "While our total market share in Europe increased in 2020(...)" next to a chart showing growth in Europe. In reality Tesla sales in Europe shrunk by 10% while other EV sales surged by 130%. In total half of Tesla market share was lost. Any explanation for it or was it just an outright lie to mislead the investors?
John Goreham wrote on February 9, 2021 - 8:45am Permalink
I have not reviewed the shareholder deck you refer to. However, maybe Tesla is using "Market share" in a different context. Perhaps Tesla was in this instance referring to its market share not of EVs, but rather, of all vehicles. This is how folks wanting to paint a better picture use data sometimes. "If you torture the data long enough it will tell you what you want it to hear." So to speak.
Qun wrote on March 28, 2021 - 12:25pm Permalink
Fundamentally, Tesla is only production constraint. It's about how many cars are being made available to Europe vs other markets. Cars made in the U.S. shipped and sold to Europe is much less profitable than if sells to the U.S., so there's a continued pivoting to sell more to the U.S., until Giga Berlin is live.