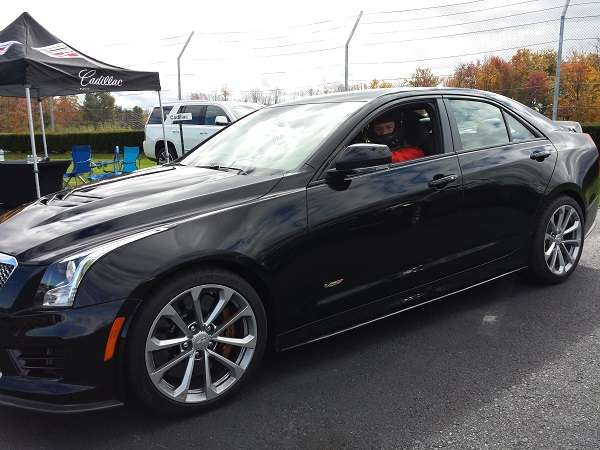 We drove two of the best track-day cars on the market to see how they compare.
Advertisement

RC F fans that follow our Torque News posts know that we have already compared the RC F on-track to the the BMW M3. Most writers who drive both like the torque of the BMW and give it the nod. However, testing has shown that the cars in the hands of a pro driver are about equal on the track. We had the chance to drive another very impressive vehicle in this expanding class, the Cadillac ATS-V back to back with the RC F this month and we were surprised by the ATS-V.

As we have said in the past, the RC F is special because of a few things. It makes all drivers feel like heroes. Regardless of your skill level, if you are anything less than an expert track driver, the RC F will likely be the car you feel faster in and are faster in. It was specifically designed to be this way ,and the BMW M4 was built to be a racecar. We also loved the paddle-shift automatic transmission of the RC F and in this writer’s opinion it suits the car and its mission perfectly.

Our test ATS-V was a sedan, but the coupe and sedan are mechanical twins. Our tester also had a manual transmission complete with rev-matching technology. The first thing that struck us was the engine. The turbocharged V6 in the ATS-V is a torque monster, just like the BMW M3/M4. Since the car was manual, and since we controlled the rev band, there was no lag, and as long as we didn’t downshift stupidly, a torque-induced oversteer loss of control was not a problem.

The ATS-V is clearly designed to match the BMW. In almost every way, it reminded us of our limited time in the M3. Unlike the RC F, the ATS-V does not seem well-suited to being a grand-touring car. It is much more hard-edged. In the ATS-V power and torque comes on and off like a light switch. There is so much torque one need not shift as often as the RC F shifts itself. I am pretty certain I could have shifted up to third and then used that gear on every part of the track except the long back straight, where I would have used 4rth to get up to about 110 MPH.

The Cadillac is the real deal. It handles flat; it has seats built for track duty, and its premium artificial suede parts make it feel very much like a Camaro ZL1. Although I can rev-match on downshifts in a road car (like a Miata for example), I cannot heel-toe well enough at speed on a track to make the car as fast as it could be. So I loved the rev-match feature of the ATS-V. However, be warned, you can move the stick faster than the technology can keep up. If you do, it won’t match the revs. You have to be deliberate and move the stick at about 8/10th the speed you could. Still, it worked great, and the sounds of the rev-matching are priceless. Up-shifts are as fast as your hands and feet, and the stick was heavy, and serious, like the Corvette and Camaro’s, are. A Nissan 370Z by comparison seems to shift slicker, quicker, and lighter.

The brakes on our tester were fantastic, but media track days don’t beat on brakes too much. We take the course a lap at a time to keep the cars shiny side up and the writers from having to stop and do obituaries.

Summing up the ATS-V based on our limited experience, it is very clear that this car is a serious track-day car. It is more like the BMW M3/M4 than the RC F (or Audi RS cars). Cadillac clearly built it to be that way. The only negative part we could find about the ATS-V was that our helmet was touching the roof and headrest more than in the RC F. It feels smaller, regardless of the spec sheet.

If you plan to track your car frequently and for some reason the BMW does not appeal to you, the ATS-V is the obvious choice. However, I remain convinced that if you plan to enjoy your car as a grand touring car most of the year and plan only a few track days per year (or less), the RC F is the obvious winner if you like its look, style, and personality.

Read More On ATS-V and RC F
Watch the 2016 Cadillac ATS-V Blast Around Circuit of the Americas
VIDEO: 2015 Lexus RC F Compared to Muscle Cars and Sporty Cars On a Racetrack