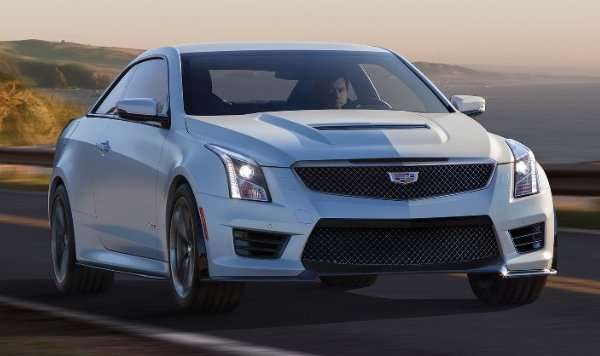 General Motors has announced the pricing for the 2016 Cadillac ATS-V and with a price starting at $61,460 for the sedan or $63,660 for the coupe, the new high performance Caddy costs less than the comparable BMW M3 and M4 – while also packing more power than the German competitors.
Advertisement

Before General Motors formally introduced the 2016 Cadillac ATS-V, we knew that it was coming and we knew that it would be a serious performer. The ATS in non-V form has proven to be a big hit for the company and the past V Series models have been incredible performance models so a proper V version of the small ATS was expected to be a real beast. The word on the street was that the ATS-V would be a proper competitor to the BMW M3 and M4, which have been the most respected models in the smaller luxury performance segment for years.

When it became official that the ATS-V would pack 455 horsepower, it exceeded the expectations of most, as not only does the new Cadillac pack enough power to rival the competition from BMW – it beats it by a pretty considerable margin. This was very good news for prospective buyers who had hoped to spend their weekends beating up on BMWs, but today, those hopeful ATS-V owners got some even more exciting news.

The Cadillac ATS-V costs less than the BMW M3 and M4.

2016 Cadillac ATS-V Pricing
General Motors hasn’t rolled out the full pricing schedule, but the starting prices for the 2016 Cadillac ATS-V in both coupe and sedan form have been made official. The 2016 ATS-V sedan starts at $61,460 while the ATS-V coupe starts at $63,660. This price includes the twin turbocharged 3.6L V6 with 455 horsepower and 445lb-ft of torque, which is enough to move this small luxury machine from 0-60 in just 3.9 seconds while heading to a top speed of 189 miles per hour. The ATS-V also comes with huge Brembo brakes, the newest Magnetic Ride Control suspension system, carbon fiber body bits, a high tech/high luxury interior and either a 6-speed manual transmission or an 8-speed automatic transmission.

"The V-Series is the ultimate expression of Cadillac's re-ignited product substance and the passion at the core of our brand," said Johan de Nysschen, Cadillac president. "The ATS-V expands the V-Series lineup, bringing a new kind of performance character to Cadillac. Lightweight, agile and potent, the ATS-V will make an ideal pairing with the larger and even more powerful all-new 2016 CTS-V midsize sedan, which arrives later this summer.”

ATS-V VS the Competition
There are a few key competitors for the new Cadillac ATS-V – the BMW M3 sedan, the BMW M4 coupe and the new Lexus RC F. The BMW twins each rely on a twin turbo V6 that provides 425 horsepower and 406lb-ft of torque. The M3 and M4 are able to hit 60 from a stop in 3.9 seconds, but they only have a top speed of 156 miles per hour. The M3 sedan starts at $62,000 and the M4 starts at $64,200, so while the new ATS-V is more power and faster, it costs slightly less than both of the high performance BImmers.

The 2016 Cadillac ATS-V is expected to hit dealerships this summer, so we will have to wait a few more months to see how the battle of the high end luxury sport sedans plays out in the real world, but right now, it looks like this new Caddy could be a major player in the segment. Production will begin this spring in Michigan and dealerships are taking orders now.