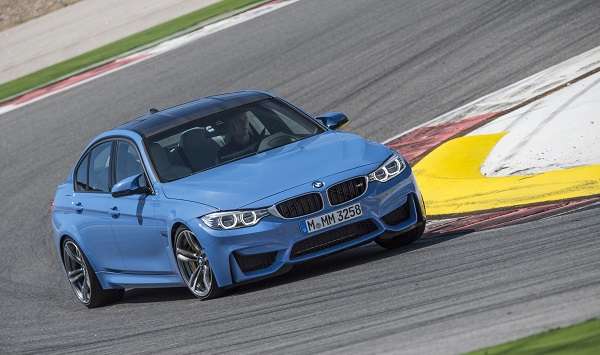 The answer largely depends on who "you" are. Here is our take after driving both on-track.
Advertisement

OK, look down at the comments under the story or in the section on FB where you found this story. See all those folks calling me dumb for testing a coupe vs. a sedan? They didn’t read this story. Why did we compare the BMW M3 sedan to the Lexus RC F coupe when BMW makes a car closer, called the M4 Coupe? Two reasons: First, the BMW M3 was all that we had access to. Second, a close read of some of the reviews of both the M3 and M4 will show that many are saying the M3 is just a smidge better than the M4. At everything. So in effect, we are comparing Lexus’ best to BMW’s best currently produced track cars.

BMW M3 Is the Serious Track Winner
The day I drove the BMW there was a pro driver in the car. I like that. He helped me to see the “Donahue” line around the track better and encouraged me to brake sooner and harder and then turn in less sharply. His suggestions made me better. One thing he told me was that the torque is so great on the M3 that it can overpower the stability and traction control. He was right. This car has more torque than most drivers will be able to use in this RWD car on track. Most drivers being the key phrase.

The 2015 M3 seems to be a racecar in disguise. It handles great, the brakes are great, and the engine is scary. Much more punch than the Dodge Hellcat I drove that same day. The torque is like a hammer. I loved the heads-up display. It is the best I have ever seen in any car. It can change the view too, which is great and the driver told me that if I had a coolant loss or other issue it would appear there. So no more looking at gauges. The only letdown was the seat. The bolstering on the bottom is not enough, and I had to brace myself with the dead pedal. Not a big deal in an automatic, but a very big deal in a 3-pedal car.

Although I had spent a day and a half total on this track (over two weeks) prior to getting into the M3, I could not drive this car well. It is way beyond my skills. Although I have been to both driving school and racing school, always owned quick road cars, and have spent a handful of days in super-fast cars on track, I am a relative novice, and this car is for an expert. The car made me feel inferior.

RC F Makes The Driver Feel Like A Hero
The 2015 Lexus RC F is the polar opposite of the BMW M3. Its engine is an asset and although more powerful than the M3’s it can be put to use by a driver without professional level skills. The seat in the RC F was the best I had ever been in on-track and on-road it was very comfortable on a 3 hour commute I made. More important than these two elements was the overall feel of the car and how I felt in it. I felt like a hero. Like all of a sudden, I could really push a car on-track and drive the line fast. It had much more to offer than I could exploit in just one full track day, but I felt like even in my first lap I was a better driver.

The RC F would be a car that a non-professional driver could grow into. An expert would reach its limits more quickly than in the M3. I did not test the M3 on-road, but the RC F was very comfortable. The ride is not at all harsh, and the cockpit is very comfortable as a grand touring car.

To me, it is very clear which car would work better for a driver like me. However, I am a bit biased and own a Lexus. This article is not meant to say which car is right for everyone, but I think I made it clear which type of driver would be happier with which car.

mike wrote on September 23, 2014 - 3:11pm Permalink
Thanks John for this review. In 2009 i bought the C AMG Benz a bit more than a year after i was seduced by the M3 and i changed my car. The Benz was realy not good for me (for me) but the M3 was realy good for me. In Aril 2012 i was in MONACO for holiday and wanted to rent a car. The guy there told me that they have no M3 actualy but they have a new LEXUS ISF (2012) available. So why not. After all for just 4 days i could be able to live with it. Without going in detail i just say that wen i was back to Deutscland almost 4 months after i bought a 2011 ISF with even 43'264 km and i still have it and love it. Everyday i drive in Autobahn between Deutschland and Switzerland and very very fast (in Deutsch side) and every evening i drive with pleasure back to my home. I plan to drive both new M3 and New RCF and will choose what's better for me.
John Goreham wrote on September 23, 2014 - 4:05pm Permalink
Mike, I put down some fast laps at Monticello this past week in the IS F. I LOVE that car and I can really toss it around a track. I also did many laps in the new RC F. It will feel very familiar to you, but the RC F has more of everything. Unlike some auto writers, I am up-front about my driving level and current limitations. The M3 just scared me. I had to back off to avoid any risk of a wreck. You have more wheel time in these fast GTs. I would love to have you circle back later and tell us what you think after driving both. Cheers,
mike wrote on September 24, 2014 - 7:07pm Permalink
Hi John. Thanks for the feedback. I'll definitely comeback after driving both of them. Cheers