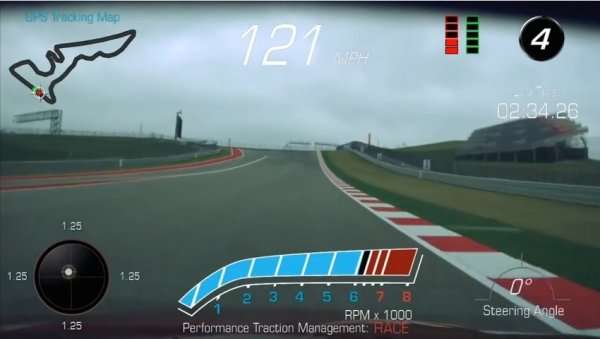 The 2016 Cadillac ATS-V will be GM’s first high performance small luxury car ever, following in the footsteps of the incredibly popular CTS-V from the past decade, and today we have a video showing the new ATS-V blasting around the road course at Circuit of the Americas.
Advertisement

For years now, the Cadillac CTS-V has been the most obvious choice for those American luxury car buyers who wanted something that packed the performance to keep up with Germany’s best, such as the BMW M5. However, with the introduction of the 2016 ATS-V, Cadillac buyers who are looking to go fast will have their choice of either the larger CTS-V or the smaller ATS-V, each of which should offer the kind of performance needed to beat the Germans at the game that they created. After all, the BMW M3 and M5 have always been a leader in the luxury sport sedan and while the CTS-V will continue to battle the M5, the new twin turbo ATS-V will take on the uber popular M3.

The Battle Through the Curves
One place where the battle between the 2016 Cadillac ATS-V and the BMW M3 will be the most hotly contested will come on the road course. We will most certainly see drag racing action between the two, but the BMW M3 always has been and always will be all about handling. At the same time, after the older Cadillac CTS-V proved itself as the best performing sedan in the world on a road course, we can expect that the new ATS-V will have every bit as much emphasis on road course capabilities as it does anything else – including luxury.

Fortunately, to show off just how well the 2016 Cadillac ATS-V will handle a road course, General Motors’ engineer John Buttermore took the newest twin turbo V Series sedan to the Circuit of the Americas road course, where he used the Performance Data Recorder system to film him hammering out a lap of the intricate road course in the newest high performance Caddy.

Just like the Performance Data Recorder in the new Corvette Stingray and Z06, the PDR in the new Cadillac ATS-V features a front-facing camera and an in-car microphone, both of which are on display in this video. As we watch the view out of the front of the ATS-V as it rockets around the Circuit of the Americas, Buttermore talks us through the lap, pointing out gear changes, his line around the track and how well the new Caddy handles even the sharpest turns.

When you watch the video below of the 2016 Cadillac ATS-V on the road course, take notice of the parameters on the screen, including the speeds reached on the long straights, the speed at which he is able to take some of the tight turns and the G forces being experienced during the lap. Of course, also make sure to have your speakers turned up so that you can hear Buttermore’s discussion of the lap – and the roar of the twin turbo V6 under the hood.

LG's New EV Battery Plant Is a Welcome News for Tesla
Tesla Giga Berlin's New Hurdle: It's Not Only the Gov't, but Now Tesla Itself
END_OF_DOCUMENT_TOKEN_TO_BE_REPLACED