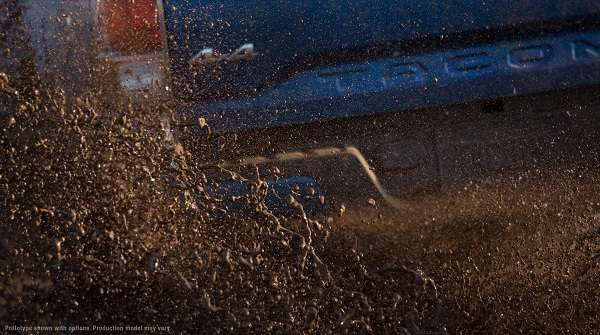 It is not a full image (yet) but in this picture the new Tacoma looks to be a new body design.
Advertisement

This past week Torque News was fortunate to be in attendance at a Toyota event when the company broke the official news that the 2016 Tacoma would be a new design and would be on display at the North American International Auto Show (NIAS) in Detroit. Today we learned that the new Tacoma will be revealed January 12th, and we will be there.

Tacoma Design
There have been many renderings and some purported spy shots showing the new 2016 Tacoma. The new Hilux, an international compact truck from Toyota, is also being mixed in with the speculation. One thing should be kept straight. The Tacoma and the Hilux are not identical vehicles and certainly don’t come with the same drivetrains and interiors. This is not to diminish the importance of the Hilux, which is universally loved in the markets it serves. It is just a clarification that the Tacoma may look, drive, and perform differently.

Tacoma Sales and Operations
Toyota is staffing up and expanding its truck manufacturing capability to meet more demand for the Tacoma. The Tacoma already sells in the approximately 150,000 vehicle per year range. Toyota is hiring new employees and adding a third shift to meet the expected demand. The added capacity is timed to for the initial months of the 2016 Tacoma’s sales in early to mid next year.

Tacoma Styling
We don’t know what Toyota will do with the new 2016 Tacoma, but we can guess. We expect an even more rugged look. The teaser photo above is not much to go on, but the Tacoma stamping in the tailgate makes us wonder if the new Tacoma might look more like the Tundra than it does now. Tundra’s looks are popular, so this would not be a bad idea.

Tacoma Drivetrain Changes
Many Tacoma fans don’t want big changes to the two offerings Tacoma has now. However, Toyota will without a doubt be improving the automatic transmissions of the Tacoma. The diesel fans are wildly enthusiastic about a diesel Tacoma, but we have no firm information to give them any more hope that an oil burner will be added. We have previously written articles discussing the ups and downs of a 2.0-liter turbo and also a hybrid engine in the Tacoma, but we have no official (or unofficial) word that would happen.