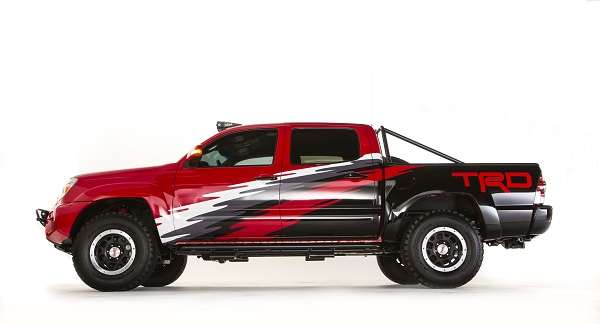 If Toyota Tacoma buyers were waiting to get a new 2015 Chevrolet Colorado, or GMC Canyon, they may have changed their minds.
Advertisement

November was the first month of sales for the all-new Chevy Colorado pickup and its twin the GMC Canyon. These two new trucks are re-entering a market conceded by GM, Ford and Dodge to Toyota when all three bailed out of the “compact” pickup truck market. It would not have been surprising to see Tacoma sales down in the first month that GM re-enters this battle. However, the Tacoma was up 3.3 percent on a volume basis and up 7.4 percent on a daily sales rate basis in November.

Tacoma Sales Comeback
Tacoma sales had dipped by comparison to the prior year over the past number of months. Sales are now back to slow growth. Industry experts we spoke to who follow trucks closely tell us that the Tacoma’s sales dip in months like this past July, in which sales were down by about 7 percent, could have been due mainly to production constraints. Toyota had hesitated to add truck capacity either for corporate fuel economy reasons or other factors.

New Generation Toyota Tacoma
With GM turning its attention to the smaller than full size market Toyota Tacoma fans wondered if this year would be the year that Toyota introduced an all-new model, or some new drivetrains to counter the threat to its market share. Toyota didn’t. However, our Toyota contacts tell us we should expect to be very busy in 2016 covering the Tacoma. They won’t say anything more than that, but trust us, that minor comment alone is unusual as automotive marketing folks generally show a strong poker face about future products.

Toyota Truck Plant Expansion
Toyota seems comfortable with its truck sales. The company has not entered any new truck markets lately and concedes the heavy duty truck market to Ford, GM, and RAM. In fact, Toyota is so confident that it will be selling more trucks that it is expanding its Tacoma manufacturing capacity. The added shift Toyota is adding comes with ne workers that will be ready to begin adding to the amount of Tacomas that the company can build in Mid-2015. That would be right around the time that a new 2016 Tacoma might hit dealers.

Expert's Prediction
Our go-to expert on trucks, reporter Tim Esterdahl, warned us that this past month was not a complete month of sales for the Colorado and Canyon. He says the real gauge of these two truck’s impact on the market will be felt early next year. Calendar 2015 could be very interesting to watch as the new GM trucks hit their stride at the same time Toyota adds capacity.

Jeff Jones wrote on December 6, 2014 - 2:01pm Permalink
That is because the GM pickups cost to much, and until they come down 10K, Toyota and Nissan will continue to out sell them. Nobody in their right mind would pay 40K + for a mid size pickup, when you can get a full size for the same price.
walt wrote on December 31, 2014 - 2:49am Permalink
Odd, I've built several Chevy Colorado crew cab 4x4's online that would suite me and can never seem to get the price beyond $35K. You must be looking at Canadian pricing.

LG's New EV Battery Plant Is a Welcome News for Tesla
Tesla Giga Berlin's New Hurdle: It's Not Only the Gov't, but Now Tesla Itself
END_OF_DOCUMENT_TOKEN_TO_BE_REPLACED