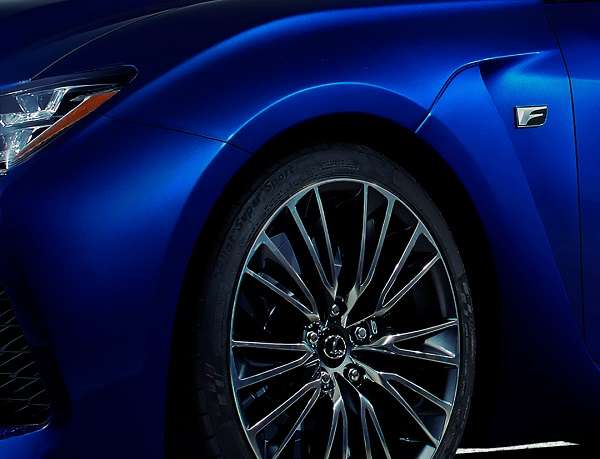 Lexus has announced an all-new sports car called the F. We predict it will be a combination of the RC 350 sports coupe and the LF-LC Concept and come with a V8 hybrid drive.
Advertisement

Lexus is taking the gloves off. Tired of being called boring, and reading comparisons its cars to BMW 3 and 4 series costing tens of thousands more, Lexus has decided to enter the luxury performance market with a new model it claims is engineered “from the asphalt up.” Announced today with a tiny teaser photo, the new car is called by Lexus a “bold, gritty, experience synonymous with the famed Lexus F heritage.” Lexus has never built a gritty car, so they are certainly stretching the F-Sport badge a bit. However, the IS-F has for some time had a powerful V8 engine. Coupled with the new RC-350 coupe body, this combination could be the 2-door, V8 sports car all Lexus and Toyota Supra enthusiasts have long-awaited.

We predicted this would come to pass in September. In our story, we call the car an RC-F. However, the new Lexus name is apparently just “F.” Given Toyota’s deep commitment to hybrids and green cars in general it would not surprise us if the new F uses a hybrid electric V8 like that shown in the LF-LC in 2012. We would have expected the LF-LC to be this exact car, but from the small photo we can see it is not the identical car. Rather, the small section shown looks a lot like the current IS-F (which is continuing unchanged through the 2014 model year). The IS-F has a unique front fender and it looks like this car also has that. It could just be an adaptation of that style.

We will know a lot more in January when the car is shown at the Detroit auto show. At that show a powerful Ford, a GM, or Fiat (Chrysler) will be the talk of the show and win an award presented by Detroit-based auto writers. We predict it will be the Mustang. That will not diminish the impact a new powerful Lexus coupe that retails in the high $60K price range could have. Corvettes, and special Camaros like the Z28 and ZL 1 now share the mid-$60K price range with rather generic BMW 335ix models. Although these are all great cars, for the any Camaro $60 K is a stretch, the Corvette is really a track car, and our opinion is that an AWD 6-cylinder compact sedan costing $60K is absolutely ridiculous, German or not. Lexus could drop a refined, V8, rear-drive sports coupe into this segment and really offer enthusiasts that plan to actually drive their cars on real roads a great new option.

Sadly for the US market, Lexus is not going to use the name Supra. However, in other global markets where the Lexus name is not Toyota’s branding convention it might. Lexus is planning to release more information in a steady trickle using the tag #AsphaltUp over the coming weeks. We will be sure to bring our readers updates.