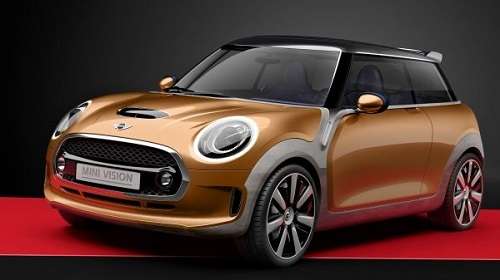 The new MINI design is released as a series of photos taken from a 3D hologram MINI is using in its development process. Many good changes, some controversial design elements remain.
Advertisement

MINI has released photos showing the new MINUI Vision, which is the prototype for the new MINI line. This new redesign will be the third complete makeover for the MINI. Wisely, MINI keeps the faith by borrowing design cues from the prior two generations, while offering enough changes to carry the design forward to the future.

The exterior will be more rounded. The upright windshield appears to tip back just a few more degrees in a slightly more streamlined look. Another new part of the design is a striking accent color that runs up from the top fifth of the wheel trim to the A pillar base. A side marker light is cleverly integrated here, hiding it. This is a design element many MINI fans will hope makes it to production.

The front face is now more body colored and the “mouth” appears smaller. Fog lights have been moved towards the venter of the grill in a unique way. The model shown is of the “S” or “JCW” style having the integrated front hood scoop that acts to inlet cooling air to the turbocharger’s intercooler system. This look defines the cool MINIs and it is great to see it being brought forward on future models. The scoop says “this is not your aunt’s version, this is the one with scoot.”

Inside the MINI exclusive ginormous center mounted speedo and information screen stays. That will delight a few MINI owners, and prevent many who looked at the car, and then decided not to buy, from doing so on this third generation as well. This design element has for good or bad become part of the car’s character. As has the MINI click system that allows owners to place cubbies and nooks of their choice in the center section of the interior. This allows cell phones, purses, Big-Gulps, Venti size coffee drinks, or just about anything a MINI owner would want at hand to have the perfect plastic holder.

MINI is also following Ford and other brands by providing a color enhancement system inside the car. The Union Jack flag is given a nod via fabric pull straps inside the doors.

The new MINI will likely be introduced at auto shows in 2014 and as a production model in 2015.