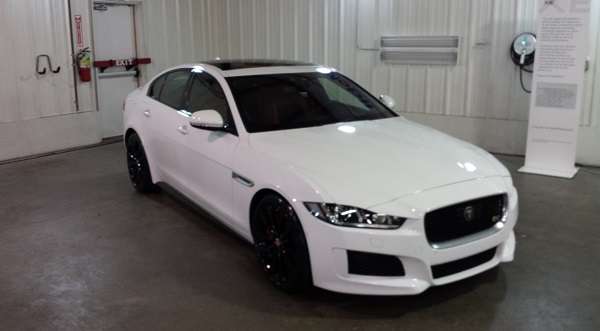 Jaguar is about to reinvent itself. Presently, all of its cars start in the mid $60K range or higher. Jaguar says that in a few years half of its cars and crossovers will sell for about $47K and its top-selling car, the upcoming XE, will start in the high $30K range. If you’ve heard this before, it is because Jaguar tried this once back in the Ford ownership days. In all seriousness, what Jaguar learned from that failure will make this try more likely to succeed and stick.

Jaguar showed off its new XE to the global headquarters of the New England Motor Press (a.k.a. Bugsy’s garage) to a full house. There is no shortage of BMW fans in the group, but reaction to the look and feel of the car (no driving allowed) was overwhelmingly positive. The car has a very familiar look. The front ¾ view looks a lot like a BMW 328i, but with a Jaguar grill in the middle. The headlights, in particular, remind one of the BMW. Inside, the top-spec model on display seemed to surpass the best of the BMW 3-Series line. However, the 3-Series this car will compete with is fully two model years away, so it is hard to call any car the 2017 interior winner yet.

Jaguar’s plan is to offer three engines. A 2.0-liter turbo four gasoline engine with the same power and torque as the BMW 328i, Lexus IS 200t, and Audi A4, a 340 hp supercharged V6 as the top model, and a diesel model which will be the least expensive model. Jaguar desperately needs to improve its CAFE scores to survive, and it is looking for diesel to help it there. Best of luck with that.

The sales leader in the 3-Series class is the BMW 328i. The 3 and 4-Series combined sell about 11,000 units per month. Lexus IS line sells at about the 3K to 5K unit per month range and the A4 about 3,000 per month. The Infinity Q-whatever-it’s-now-called used to be a reliable number two in sales back when it was the G37, but now fights with Audi and Lexus for that second or third place spot. With Fiat planning a premium entry to this market by 2017, Jaguar is going to have quite a fight on its hand for sales.

Interestingly, Jaguar didn’t seem too worried about Lexus’ IS. Perhaps it should be. The Lexus IS 350 is the reigning comparison champ having bested the BMW 335i in testing by both Car and Driver and Road and Track.

Truthfully, performance matters less and less these days. Jaguar knows this and is now starting to position itself with a fantastic ownership experience. Jaguar passed Lexus for the number one spot on J.D. Power and Associates’ Customer Satisfaction Survey and has been finishing on the podium in quality and reliability surveys for many consecutive years now. Jaguar also just launched a new 5-year warranty and included maintenance plan to one-up BMW. Perhaps the new 2017 XE will be the new number two car in the segment after it settles in. Jaguar would (and should) consider that a huge victory.