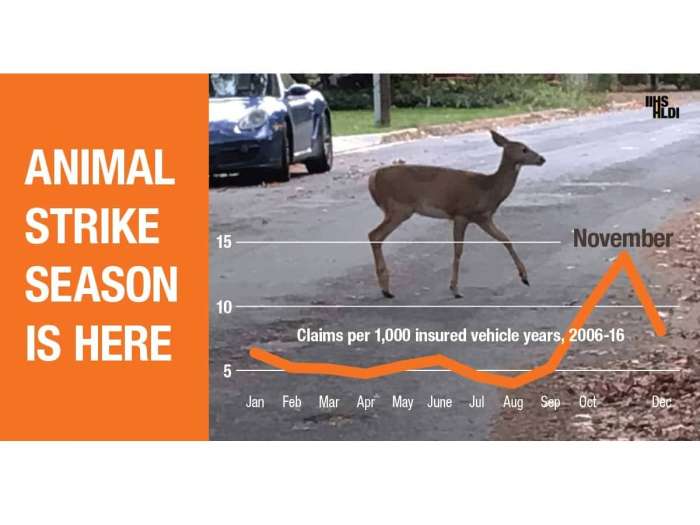 IIHS Reminds Drivers That It is Peak Deer Strike Season

Watch for deer holding picket signs. The safety experts at the Insurance Institute For Highway Safety remind drivers that November is the peak of the deer-strike season.
Advertisement

The Insurance Institute For Highway Safety recently released this sobering image charting the number of deer strikes per month. The peak of the chart is right now, November. IIHS says that "An estimated 1.5 million deer-vehicle crashes occur each year on U.S. roads, resulting in at least $1.1 billion in vehicle damage." State Farm estimates that of those, 1.2 million occur in the fall.

Each year approximately 200 Americans lose their lives in accidents involving animals. 75% of the strikes are deer. Location matters, but the statistic is deceiving. For example, Vermont has one of the lowest rates of deaths due to animal strikes and Texas the highest. However, the deaths are only reported in an absolute form, deaths per state per year. The likelihood of such an accident is not really represented since the number of driven miles is not factored in.

Cars have the highest cost in terms of repair dollars among all vehicles involved in animal strikes. IIHS and HDLI found that the Hyundai Elantra and Prius c have the highest cost per deer strike. Bigger, tougher vehicles fare far better. IIHS says, "The Wrangler two-door small SUV and four-door midsize model had the lowest overall losses for animal strikes at about one-third of the all-passenger vehicle average. Next best are the Chevrolet Silverado 1500 crew cab large pickup and another Jeep, the Grand Cherokee four-door midsize SUV."

As would be expected, most animal strikes are with the front of the vehicle. However, one percent of animal-strike related claims are from strikes with the rear of the vehicle.

Consumer Reports suggests the following may be helpful in avoiding deer strikes and minimizing damage and danger if a strike does occur:

- Slow down. Watch for deer especially around dawn and between the hours of 6 p.m. and 9 p.m., when they're most active.
- Be aware. Look out for deer-crossing signs and wooded areas where animals are likely to travel. If you travel the same route to and from work every day, you may find deer consistently grazing in the same fields. Make a mental note of when and where you regularly see the animals.
- Be alert. If you see an animal on the side of the road, slow down. At night when traffic permits, put on your high beams for improved visibility.
- Brake, don’t swerve. Swerving to avoid an animal can put you at risk for hitting another vehicle or losing control of your car. It can also confuse the animal as to which way to go. Instead, just slow down as quickly and safely as you can. Your odds for surviving an accident are better when hitting an animal than hitting another car.
Assume they have friends. The “where there’s one, there’s usually more” often holds true. Deer travel in groups, so if you see one run across the road, expect others to follow.
- Don’t rely on deer whistles. These are aftermarket devices that some drivers put on their front bumpers to scare off animals. But animal behavior remains unpredictable, even if you use one of these.
- Buckle up. A seat belt is your best defense for minimizing your risk in a crash. An Insurance Institute for Highway Safety study found that 60 percent of the people killed in animal-vehicle collisions weren’t wearing their seat belts.

For more on animal strikes check out IIHS' report, "Colliding With Deer Is Costly."

DeanMcManis wrote on November 21, 2018 - 8:18pm Permalink
Thanks for the heads-up and tips John. I've hit one deer (although not hard), and narrowly missed hitting two others. Living outside of the city has it's unique hazards, but driving slow and safe in the heavy animal traffic areas in the hills helps. Today I almost ran through a flock of wild turkeys (ironic huh?) on the way home.