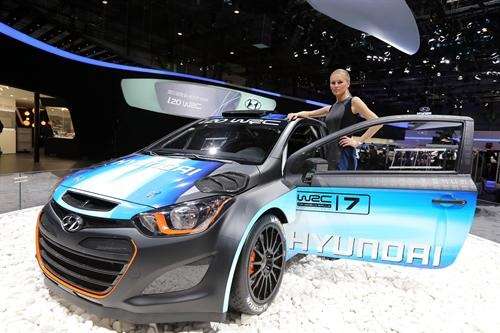 The new Hyundai i20 racer is revealed at Geneva. Here is why Hyundai's return to the sport is perfectly timed.
Advertisement

Hyundai has entered the FIA World Rally Championship and revealed its vehicle this week at the Geneva Auto Show. In an apparent break form the tradition that reserves “small i” for things that are electric, Hyundai calls its entrant the i20. The i20 is a two door hot hatch available in some global markets, but not in the US at this time. Hyundai was part of the rally world for three years from 200 to 2003 with its Accent racer, but has been absent since.

In recent years there has been a major reshuffling of manufacturers going into and out of WRC. Subaru was one of the first to leave, and they timed it perfectly. They left just as Sebastian Loeb began his amazing reign at the top of the sport. Frankly, all sports. Loeb has proven to be the racing world’s most dominant driver. Thankfully, F1 has supplied some drivers to the WRC world for Loeb to beat giving some credence to his being the best driver, in the world, ever. The reason we mention all this is that he is now leaving the sport. Therefore, other manufacturers might find themselves at the top of the podium. While he was in his decade of domination pretty much nobody else won races, rallies or championships. Why would any manufacturer enter a sport they know they cannot possibly win? Loeb drives for a European car manufacturer that does not sell products in the US.

The Hyundai racer will have an uphill battle, but Hyundai/Kia has had excellent luck in racing and likely learned a lot form it. Unlike some American brands, Hyundai and Kia tend to race in series where the cars are closely based on cars people drive and can actually buy. As opposed to rear wheel drive, imaginary, universal design tube-frame, V8 “stock cars.” Commenting on this, Hyundai Motorsport Team Principal, Michel Nandan said in a press release "We are still in the infancy of our exciting WRC program so the development curve for the car and team is steep. Hyundai has returned to the World Rally stage to demonstrate its technical capabilities on one of the world's most competitive stages. Our ultimate goal is to be victorious but we know that we have a lot of tough competition ahead of us. We will use this year to lay the solid foundations but hope to advance quickly as 2014 approaches."

MINI recently departed the WRC circuit which was a crying shame because the vehicles it makes pretty much all fit the basic mold of a WRC race car. The production cars even have the right engine displacement (1.6 liters) and are forced induction cars like the WRC race cars. VW has jumped in with its Polo which is also a natural for the series. With Ford’s involvement, the series is really a global race series that pits the automaker’s actual production based cars against one another. Subaru is rumored to be considering a return to the sport with its upcoming new Impreza, but that car seems too large to us to be a real contender.

Interestingly, the rally world is morphing. The classic tarmac and gravel closed courses with one car running at a time are being challenged by a new rally race series called Rallycross, where the cars are more captive to an area for viewing. If you have not seen an example of this you are really missing out. Ken Block, one star of the series frequently produces short videos of his race car in action. In one recent video, seen here, he jumps his car. Sideways.

Patrick Rall wrote on March 7, 2013 - 4:03pm Permalink
Alright guys...now lets see the new Global RallyCross car!
John Goreham wrote on March 8, 2013 - 2:45pm Permalink
So as not to play favorites (with Ken Block and Ford) I think you should ask Hyundai for a ride in the i20. Or better yet, send one of your East Coast writers on assignment. :)