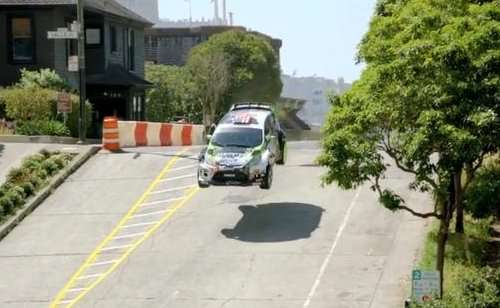 Ken Block's Gymkhana 5 hits YouTube as his best video yet

For every car enthusiast around the world who is battling a case of the Mondays salvation has arrived as the debut of Ken Block’s Gymkhana 5 offers almost 10 minutes of relief from the work day with Ken and his mighty Ford Fiesta tear up the streets of San Francisco in the most epic edition of the Gymkhana series yet.
Advertisement

While previous videos by Ken Block (such as Gymkhana 4) features lots of special effects and other, non-driving segments, Gymkahana 5: Ultimate Urban Playground is all about Ken Block and his Ford Fiesta Hybrid Function Hoonage Vehicle (HFHV) showing why he is regarded as one of the greatest driving showmen of all time. Gymkhana 5 takes place in a variety of scenes around the San Francisco Bay area with much of the video shot while Ken hoons it up on (then-closed) public roads. The result is what can arguably be tagged as the greatest display of Block’s work to date.

Like all of the uber popular Gymkhana videos offered by rally racing and internet sensation Ken Block, Gymkhana 5 shows Block and his ultra high performance, 650 horsepower Ford Fiesta drifting around turns at high speed, doing donuts around various objects, making some longer high speed runs and – of course – getting big air off of a collection of different types of jumps. Gymkhana 5 must have relied upon literally hundreds of cameras with shots from stationary cameras along the route, cameras mounted on a helicopter and dozens of GoPro cameras inside and outside of Ken’s car along with being mounted on obstacles along the way. All of these cameras work together to offer the viewers every imaginable camera angle – showing us the car in motion as well as Ken Block working his magic behind the wheel of the Fiesta HFHV.

Gymkhana 5 starts out fairly simply, with Ken Block climbing into his Ford Fiesta HFHV and strapping in before rocketing along a bridge leading into San Francisco. He enters the city via an on ramp at very high speed with the tires smoking as he drifts the long, sweeping turn. The real awesomeness of Gymkhana 5 begins shortly after the two minute mark when, after exiting a short slalom, Block enters a hard right hand turn by spinning the car to the left and passing through a set of road work barrels – backwards – while the wheels are spinning in the forward direction. The Fiesta barely comes to a stop before it is once again headed off in the proper direction…but this backwards drifting maneuver is definiately one of the “wow” features of Gymkhana 5.

Next, Ken Block uses a pair of iconic San Francisco trolley cars are obstacles, drifting around and between them in a figure 8 pattern while both cars are moving. Block then takes the Fiesta HFHV through a pier area and onto a barge where he begins doing donuts and spins. Those of you who saw the teaser video for Gymkhana 5 and wondered where the barge comes into play may think that this is it – but it is not. Block roars off of this barge and back onto the streets of San Fran – breaking off one of the GoPro cameras in the process.

The timer will read 3:46 when Ken Block and Gymkhana 5 bring us what I consider to be one of the most remarkable stunts pulled by block in the Gymkhana series.

I am sadly not familiar enough with the San Francisco Bay area to know what street this jump takes place on but it is one of those roads that the SF area is known for with a long uphill portion leading to a very quick run down the other side of the hill. For normal drivers, this is a point at which extreme caution is taken but for Ken Block – this is one gigantic jump. Block hits the top of the hill so fast that his Fiesta soars well over the flat part of the road… slamming down onto the pavement well down the other side in a truly incredible jump. At the 4 minute mark, slow motion allows you to see the impact of the landing reverberate through the chassis and body of the vehicle. The jump is so awesome that Gymkhana 5 shows various angles of the jump for some 30 seconds – and I enjoyed every second of it.

The image above on the right is a still captured from the video during this jump. “Wow” is right.

Block then continues on with his hoonage of San Francisco, speeding through the streets and doing donuts around construction barrels before heading into another big air jump just before the 5 minute mark in the video. We then get a look at Block showing off his rally racing abilities as he rips through a tight section of roadway featuring repeated, hard switchbacks.

At the 5:40 mark comes my favorite move of Gymkhana 5 as Ken Block roars up a short hill and jumps – while turning the car. This left Block to soar through the air sideways and land sideways, turning nearly backwards as his Fiesta drifted just inches (if not less) from the safety barriers. The slow motion, head on shot of his move is automotive poetry in motion.

The 6 minute mark brings in a unique cameo appearance from fellow Global RallyCross racer Travis Pastrana who helps out with his dirt bike rather than his Dodge Dart rally car. As Block approaches Pastrana, Travis rolls his motorcycle forward a bit and pulls it up onto the front wheel as Ken Block does a donut around – and literally under the elevated rear wheel of Pastrana’s dirt bike. Travis then rockets away, pulling the bike up into a wheelie as Block continues to drift donuts around the biker while both vehicles quickly move down the road.

This portion of the Gymkhana 5 video comes to an end as Block exits the city and hits the finish line in the hills high above San Francisco. We see Block climb out of the car and you may be lead to believe that Gymkhana 5 is over but what about the barge from the teaser video? After a few odd shots of seagulls flying overhead, we are whisked away to the familiar scene from the teaser video of Mr. Block standing on a moving barge in the San Francisco Bay. The last two minutes of Gymkhana 5 show Block and his Fiesta HFHV doing donuts around a forklift and around a construction stantions on the narrow barge as cars pass on the nearby Golden Gate Bridge.

Well, enough talking… check out the YouTube video of Ken Block’s Gymkhana 5 below! Congrats to Ken Block, his team, the folks at Ford and everyone else involved in making Gymkhana 5 one of the most amazing pieces of automotive footage online today!