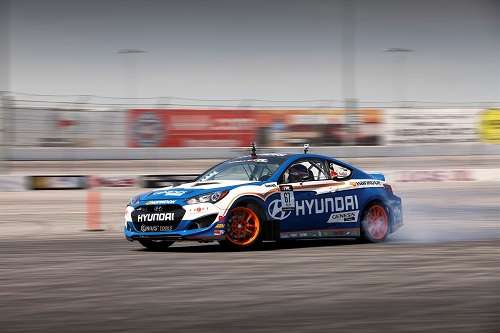 Hyundai and Kia use the old "win on Sunday, sell on Monday" plan to rev up sales by highlighting the sporty nature of their cars
Advertisement

For much of the past century auto-racing in America by the established automakers has served two purposes. First, it gives the automakers a way to shine a light on their cars. This is known as the halo effect. Buyers (mainly men?) follow the racing sports and they mentally make a connection with their favorite team and auto-maker. Win on Sunday (when viewers and spectators around the country watch the races) and sell on Monday, when those fans go to buy their next family car, is an age old truth. Second, the automakers claim, perhaps with some sincerity, that the things they learn racing about durability can later find its way into your driveway. True or not, it gives the automakers an excuse to be involved with motorsports.

The problem for the Asian and European automakers is that they missed the memo that NASCAR would become America’s favorite racing series. That hasn’t kept them out of racing, and may even have benefited them, since NASCAR racing cars have absolutely nothing to do with the brands whose name they wear. Honda has done very well with Indy Car engines and even found itself a sponsor for Talladega Raceway as a generator supplier to keep its name in racing. For years Subaru was the car that came to mind when someone said “rally car.” Mazda is known and loved by SCCA and many other racers for their Miata. Now Hyundai and Kia are both finding ways to get their cars into racing.

Hyundai has just renewed a four year agreement with Rhys Millen Racing (RMR) to compete in the Formula Drift series. For those not in the know, drifting is basically driving a rear-wheel drive car sideways with grace and style - and a lot of burning rubber. Although the RMR car is modified to make well over 600 horsepower, its rear-drive platform and many key components such as the engine block are from the stock Hyundai Genesis Coupe. The Genesis Coupe is Hyundai's "sleeper" pony car that competes with the Chevy Camaro, Ford Mustang, and other rear-drive muscle cars. Steve Shannon, Hyundai Motor America's VP of marketing, sums up the plan for Hyundai’s sponsorship of RMR this way “It’s thrilling when a driver of Rhys Millen’s caliber combines tire-smoking power with surgical drifting precision. And, in addition to the intense drifting action, Hyundai will provide trackside interactive facilities where drift fans can check out its latest products, driving games, music partnerships and race fan gifts.” In other words, "Hey fans come see the Hyundai race car stuff and maybe think about a Genesis of your own."

Kia is Hyundai’s corporate sibling and also has a racing series. Kia races its Forte Coupe in the Continental Tire Sports Car Challenge. The street tuner class it races in is a good way to highlight the sporty nature of the car. With some recent podium finishes the program is yielding Kia publicity it can parlay to marketing.

Automakers have always found themselves in racing and Hyundai and Kia’s racing programs have brought the Korean manufacturers street ‘cred and some marketing buzz to help it sell cars.