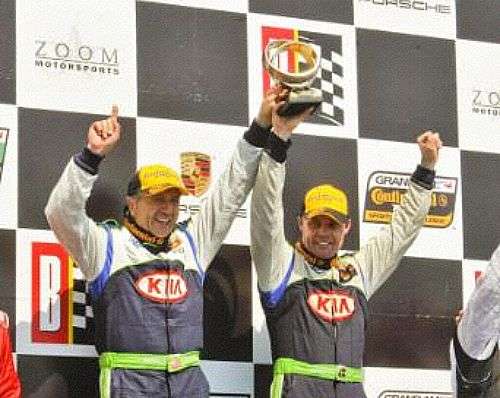 History was made this weekend for Kia Motors' second-year motorsports program in the Street Tuner (ST) class of the GRAND-AM Continental Tire Sports Car Challenge (CTSCC) race in Birmingham, Ala.

A large group of Kia dealers and workers from the company's U.S. assembly plant in nearby West Point, Georgia filled the Barber Motorsports Park stands to watch Kia win in the third race of their second year program.

"After starting the year with two top 10 results and our first podium finish, we arrived at Barber Motorsports Park with high expectations and our sights set on earning Kia's first-ever victory," said Michael Sprague, vice president, marketing & communications, Kia Motors America.
"With the proximity to KMMG, the Barber race was a bit of a homecoming for us, and the efforts of Michael, Nic and the entire Kinetic Motorsports crew led to this tremendous milestone. Notching our first win with a large number of Kia team members and dealers cheering us on made the result even more memorable."

In addition to the victory, the driving team of Adam Burrows and Trevor Hopwood recorded their first top 10 finish of the year in the No. 12 Infinity Audio Kia Forte Koup.

After starting in the sixteenth position, Michael Galati maneuvered the No. 10 Forte Koup into the top 10 early before handing the car off to Jonsson, as part of a pristine pit stop with 90 minutes remaining in the two and a half hour race.

With Jonsson at the wheel, No. 10 moved into the top five before overtaking the lead position with only 30 minutes remaining in the race. Jonsson led the final 23 laps as he secured Kia's first-ever checkered flag, fending off numerous challengers.

"It's nearly unheard of for a second year racing program to stand on top of the podium, and today was a special day for Kia Motors and Kinetic Motorsports," said Jonsson. "It's even better that we were able to deliver our first win with so many Kia dealers and team members from the plant here, and this result would not have been possible without the tireless efforts and commitment from every member of our racing team."

Fans can watch Kia’s race to its first-ever victory April 16, when SPEED broadcasts the Barber 200 at 2 p.m. ET.

The Infinity Audio Kia Forte Koups will return for round four of the CTSCC on May 14 at Virginia International Raceway.