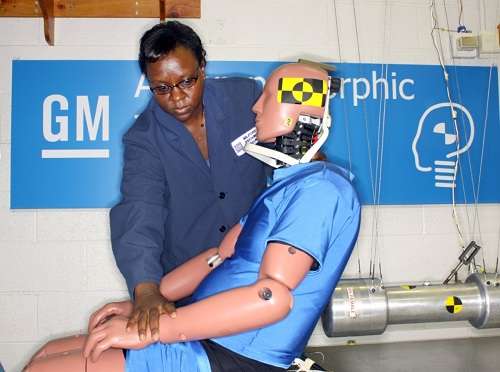 Lost amid the media hype over a few fires related to electric cars is the fact that an electric car fire related death has yet to occur. Non-electric car vehicle deaths will be about 33,000 Americans this year. In fact, according to the Center for Disease Control and Prevention (CDC), vehicle related deaths are the number one cause of death in the United Stated among all Americans age 5 to 34. Over 2.3 million Americans will visit the emergency room this year with injuries related to a vehicle*. Automakers, the Insurance Institute for Highway Safety (IIHS) and other organizations have developed fantastic testing procedures and crash test dummies for the most deadly crashes. Attention is now turning to those accidents which are less likely to cause death, but cause serious and long-lasting injuries nonetheless. Rear-impact crashes are one of these areas.

General Motors has helped by contributing considerable resources to evaluate a new crash test dummy. The dummy, called BioRID, was developed by the Chalmers University in Gothenburg, Sweden. This new dummy is unique in that it has 24 individual vertebra simulators. The dummy was specifically designed to allow the dummy to move in a crash like a human so that neck and spine injuries can be measured during crash tests.

Barbara Bunn, shown in the photo, is a General Motors crash testing engineer. She is also the chairperson of the Occupant Safety Research Partnership’s Rear Impact Dummy Task Group. Ms. Bunn took the lead in establishing a series of tests for the BioRID dummy. It was necessary to first determine the efficacy of the dummy and to baseline its data repeatability. Translated that means someone had to make sure the dummy gave the same results over and over again in identical tests. Rather than work alone, which would have been the easy path, Ms. Bunn collaborated with other industry engineers from Chrysler and Ford, as well as with engineers from Humanetics Innovative Systems, the company that now makes BioRAD. This team developed a test for BioRID. Ms. Bunn separately collaborated with engineers from Porsche, VW, Daimler, and other manufacturers to establish posture and seating position standards for the testing. Gay Kent, GM general director of Vehicle Safety and Crashworthiness commented in a press release saying, “The test matrix Barb developed will be helpful to the industry for determining BioRID’s future, and demonstrates GM’s commitment to advancing crash test dummy technology and procedures for evaluating vehicle safety.”

Ms. Bunn was recognized by The United States Council for Automotive Research in May for her work on the expansive project.