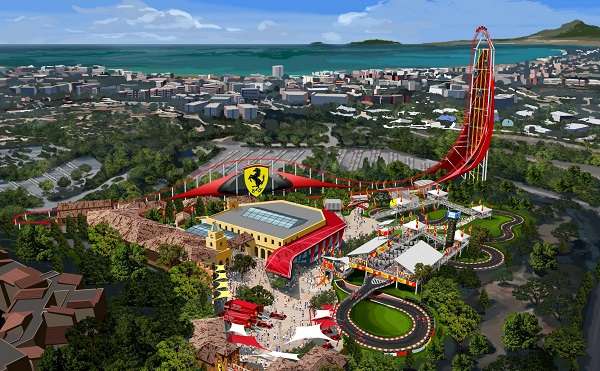 Not many people will ever own a Ferrari, but luckily, a company with a long name is hoping to give you to a taste of the brand experience.
Advertisement

Good news and bad news Ferrari lovers. First the bad news. There are a little over 7,000,000,000 of us here on the big blue marble and Ferrari is capping production of its products at 7,000 units each year. So your chances of owning one of those new exotic cars is roughly 0.00001 percent. Which according to my calculations, is the same as your chance of being struck by lightning, then hitting the lottery, then dying of a bee sting, and then being reincarnated as Sting. So what’s a Ferrari lover to do? How about go to a Ferrari Land theme park in Spain? Sounds like a good back-up plan to this car nut.

There is already one sort of Ferrari Land in Abu Dhabi. If you think it is hard getting a vodka tonic inside the real Disney parks, this place will not increase your chances. However, it does have the world’s fastest rollercoaster, so there’s that. Abu Dhabi sounds far away to this Providence RI based writer. Barcelona is much closer and that is the ‘hood that this new park will be built by PortAventura Entertainment S.A.U., a subsidiary of Investindustrial (don’t blame me for the spelling or the name).

The park will cover 75,000 square meters which means it will be bigger than 75,000 square feet, which is to say, it will be medium sized. There will be a 5-star hotel will 250 rooms. The press release also said there would be restaurants and “a” driving simulator. Let’s hope that’s a typo and they mean a driving simulator around every corner. The park is expected to cost about 100 million Euros, which is roughly the cost of 300 Ferraris, if I did my division right. One Ferrari being about a third of a million Euros.

OK, enough snarkiness. Here’s the truth dads. If you have not been to the big theme parks starting with a D, you can expect long lines filled with odd looking couples with charm bracelets and mouse ear hats on their honeymoons, giant turkey legs, frozen bananas, no Starbucks, no drinking in the parks and your kids will love it. By contrast the Spanish Ferrari Park will have less people, no giant turkey legs, and a cool Ferrari theme. More importantly, Barcelona is very near to the island paradise of Majorca. I’ve been to Barcelona and also Majorca. If you have the means, I highly recommend it. I will warn you dads, Majorca is mostly blond German tourists in fine physical condition. The females do not wear bikini tops. So if that bothers you in some way, you should prepare for that.

A partner at the company developing the park, Andrea C. Bonomi, was quoted as saying “PortAventura is one of the leaders in Europe’s tourism sector, while Ferrari is an iconic company that represents the very best of Made in Italy. The synergy between the two groups creates a powerful combination that means we can offer clients of both brands a unique experience.” Sounds fun!

Related Stories:
Summer camp for Ferrari kids is a little different than the one you might remember
Cameron's Dad's Ferrari from Ferris Bueller up for sale (again) - Video!