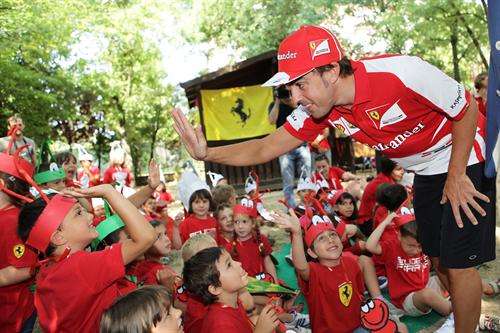 Campers in Marenello Italy get to do all the fun stuff you might expect, but they also get to meet some amazing people.
Advertisement

Summer camp is something that many kids remember for the rest of their life. Archery, swimming, dodgeball, fishing and of course the Ferraris. For a lucky 600 children, mostly the employees of Fiat’s Ferrari, that is the memory they will be carrying forward.

The summer camp in Maranello Italy is called the Junior Summer Formula. The Kool-aid there must be good because the attendance has grown from about 200 to about 600 children over the past few years. Four schools are involved in the camp which is jointly developed by Ferrari and the town council of Marenello. Three schools in Maranello and one in Modena.

The famous drivers at Ferrari including Luca di Montezemolo and Fernando Alonso are sometimes hosted by the camp’s directors. As the photo shows, these are heroes that the school children know of in the way that US students might have heard of Tom Brady or LeBron James. At the visit Montezemolo was given a leather emblem that some of the camper’s moms made in the leather works at the Ferrari factory and Alonso got a Santa bag full of fan letters form the children.

“This is a really great initiative that demonstrates the close links between the company and the area,” said Montezemolo, to Lucia Bursi, the Mayor of Maranello. “I wish to thank the local council of Maranello for its support in this project, which is growing ever more popular, year after year.” “A good energy boost, almost the same as the one you get from KERS at the start,” said Alonso. “Just what was needed before heading off to Budapest!”

The campers are divided into two groups of 3 to 6 year olds and 7 to 14 year olds. However, the event brought out not just the 60 students, but also about 50 teachers to cheer the local heroes.