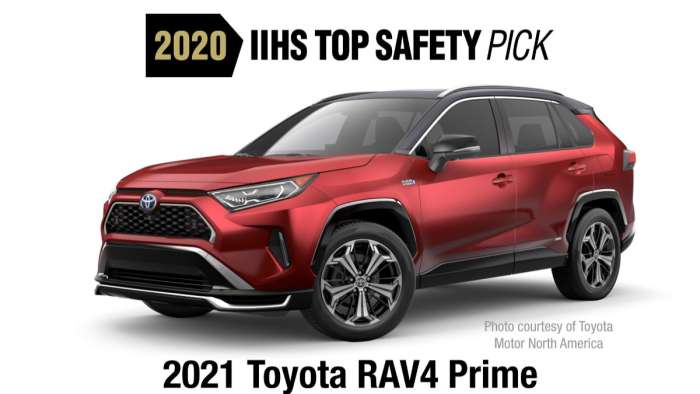 The Toyota RAV4 Prime and the Venza are just the latest green vehicles from Toyota to top the charts in safety.
Advertisement

The all-new 2021 Toyota RAV4 Prime and Venza all-wheel drive green crossovers have only just hit the market in America, but both are already earning industry awards. Today's news is that both have earned the TOP SAFETY PICK designation from the Insurance Institute for Highway Safety. Both of these models share the same platform as the already-awarded TOP SAFETY PICK RAV4.

In order to qualify for a TOP SAFETY PICK award, a vehicle must earn good ratings in all six crashworthiness evaluations, including the tricky driver-side and passenger-side small overlap front, moderate overlap front, side, roof strength, and head restraint tests. The vehicle must also earn a score of advanced or superior ratings for both vehicle-to-vehicle and vehicle-to-pedestrian front crash prevention. Last, the vehicle must offer acceptable- or good-rated headlights on at least one trim level. It is here that the RAV4 Prime and Venza just made it.

None of the Venza's headlights earned a score of "Good." The LED projector headlamps that come on the Venza’s XLE and Limited trims earn just an acceptable rating. Unfortunately, the LED reflectors that come on the base LE trim earn a lousy marginal rating due to inadequate illumination on left curves.

The RAV4 Prime did earn a score of Good for its headlights. However, only the curve-adaptive LED projector headlights offered on the RAV4 Prime as part of the Premium package on the XSE trim earn that rating. The base LED projectors earned an unforgivable poor rating due to inadequate illumination on curves.

Toyota works closely with all regulatory agencies. By doing so, Toyota's RAV4 Prime and Venza were added to the IIHS schedule. By contrast, Tesla opted not to nominate its new Model Y for testing on this year's schedule. So buyers of that new green crossover have no objective way to compare the vehicle's safety. At the time of this writing, NHTSA had also not rated the Model Y.