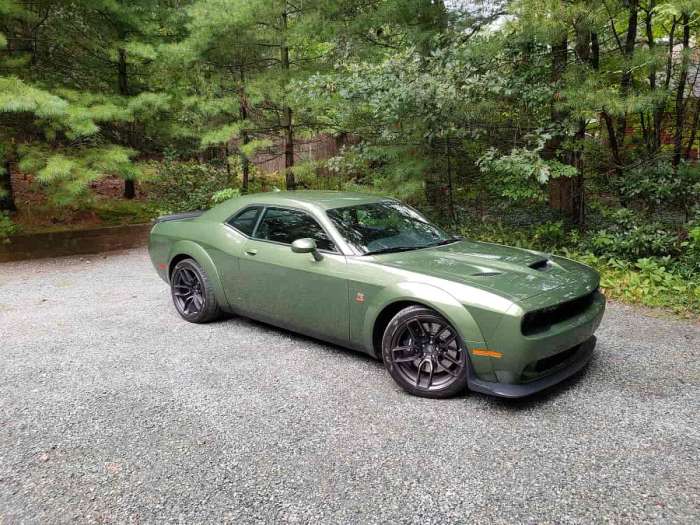 The 2019 Dodge Challenger R/T Scat Pack Widebody is made special by what equipment it has, but also by what it brings its owner.
Advertisement

When Dodge revealed the Challenger trims for 2019 experts like our own Patrick Rall spotted some interesting combinations. One of them is the R/T Scat Pack 392 Widebody. That's quite a collection of go-fast nicknames and the combination is one that fans are going to love.

- Here's the full rundown on the 2019 Challenger lineup.

The Challenger R/T Scat Pack 392 Widebody brings together the special suspension, wheels & tires, brakes, body enhancements, and other special elements Dodge has been developing to make the Challenger handle and stop as well as it accelerates. Having driven both Widebody Challengers and "non-widebody" special Challengers on-track, we can report the magic is apparent. You don't need to be an expert to feel or appreciate it.

On public roads, the Widebody car also has its merits. And no downsides that we can detect. Even with the huge 20" 35-series tires (same size all around), the car is still comfortable over normal bumpy roads. The looks are improved by the fender flares, hood vents and small spoiler as well.

The 485 hp 6.4-liter engine is more than enough for most uses. It certainly won't beat a Hellcat in a drag race, but it will beat pretty much everything else. On public roads, there is almost no place to put that much power down with two wheels. During our testing, we were traveling alone on a straight country road at about 40 MPH and then pinned the go pedal. The car breaks the tires loose and does a cool wiggle before hooking up and pinning you to the seat. Cars that can do this are not being held back by a lack of horsepower. 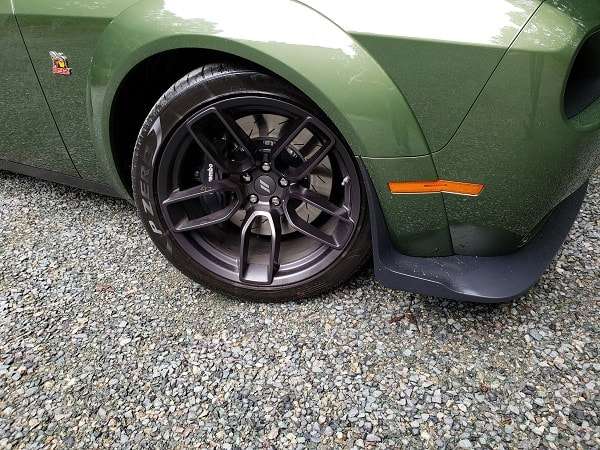 Our Tester rang in at $51,116. Let's call this a "fifty grand" price point. The performance one gets from Dodge is astounding at this price point. How Dodge delivers it is no secret. No adaptive cruise control, no moonroof, the most basic seats in any $50K ever, no back seats, and a lot of other nos. Almost none of which you will miss. Our car had the $1 passenger seat added. It also had the upgraded 8.4" U Connect screen and the automatic transmission package. If we were building a Challenger this might be the exact car we would configure. 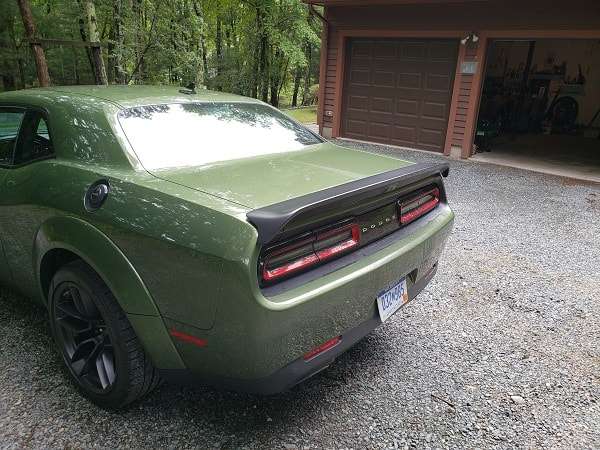 The Challenger R/T Scat Pack 392 Widebody also comes with some hard to explain features. For example, people will want to take its picture. Usually, with them in it. You also get a lot of smiles, breaks in traffic, and waves from other people, particularly Charger and Challenger owners. Folks also want to tell you about their previous cars. At a park we visited, a woman handing out information on butterflies stopped us to tell us her first car was a 1970 Barracuda. She and I had a nice chat. My first was a '69 Fury. This 2019 Dodge has a link to its past almost no other performance car today can match. By contrast, prior to testing this $50K Dodge, we had a (fantastic) 2018 BMW M5 with a $130K sticker. No smiles, no waves, no picture requests, and nobody stopped us to tell us about their first car.

There are plenty of more knowledgeable Dodge enthusiast writers out there who can go deeper into the fine details on what the Dodge R/T Scat Pack 392 Widebody has that's special. I'll leave the technical stuff to them. What I can offer readers about this car is that it makes you part of a very large community of happy people who will want to get to know you and your car.

Darrin Barnard wrote on February 5, 2019 - 10:06am Permalink
Looking or want to order a 2019 challenger widebody scatpack in f8 green
Morgan wrote on September 28, 2019 - 5:43pm Permalink
It certainly won't beat a Hellcat in a drag race, but it will beat pretty much everything else. A Mustang GT or Camaro SS from a dig will spank the Scat Pack. I can’t believe Dodge charges an extra $6k for fender flares. That Widebody is just lazy, imo.
John wrote on September 19, 2020 - 11:45am Permalink
I have one nothing is lazy about it lol...
Morgan wrote on September 20, 2020 - 2:30pm Permalink
I don’t think you’re understanding me correctly. The wide body itself is just fender flares. It’s not a wide body, like something TOPO The WideBody King does or the Shelby WideBody.
Sherri Ziegler wrote on April 4, 2021 - 2:17pm Permalink
My dad just purchased a 2020 dodge scat pack and realized in automatic the car starts off in second gear not first didn’t know if it was common