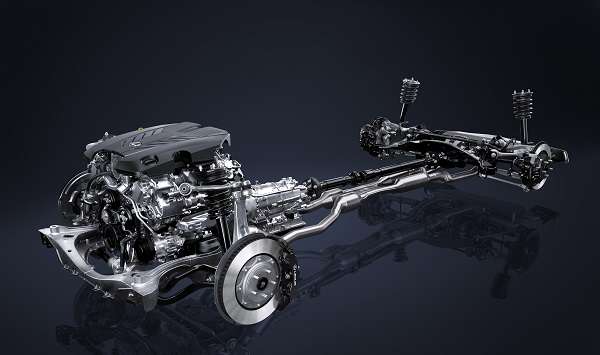 The new 10-speed automatic in the 2017 Lexus LC 500 is a shift from the past.
Advertisement

The all-new 2017 Lexus LC 500 will use most of the engine technology from the current 2016 RC F and GS F cars. The V8 will produce about 470 hp, more than enough to propel the LC 500 forward at speeds that will test the limits of legal on-road driving. Unlike the RC F and GS F, the new LC 500 will not use Lexus’ eight-speed “Sport-Direct-Shift” automatic transmission. Instead, Lexus has decided to use a ten-speed automatic from supplier Aisin. Let’s look back at how and why Lexus arrived at this transmission.

The original, second generation IS cars with V6 engines all used Lexus’ 6-speed automatic. The transmissions had no rev-matching on down-shifts, so manual operation using the paddle shifters or the gear selection shifter on the center tunnel were not very smooth ( I speak form experience as I own a 2010 IS 350C coupe/convertible). Late in the generation rev-matching was added. These transmissions had the advantage of being able to be placed into 4-speed mode, locking out 5th and 6th for spirited driving. In combination with “Power” button in the IS, the transmission was very responsive and a good GT car transmission.

When the V8 powered IS F was introduced Lexus used a different, eight-speed transmission. The eight-speed featured faster shift times (0.1 seconds, faster than humans can actuate a manual) and supposedly improved fuel economy (there was no V6 eight-speed to compare). However when we tested the IS 350 and the IS F back to back on-road in GT-style sporty driving, the IS F felt held-back by the eight-speed. Unless one took control manually and used the four-speed lockout, the car was always in too tall of a gear and didn’t feel much sportier than the IS 350 with the V6 and six-speed. On-track the eight-speed was noticeably better.

When the RC F debuted, Lexus introduced a newer iteration of the eight-speed and on track back to back with the IS F it was simply world’s better. Lexus had re-tuned the transmission and after extensive track time in the car, we called it the best feature of the RC F.

Lexus LC 500 is not really a sports sedan/coupe like the IS and RC. It will be more of a grand tourer than either in the sense that it will up the luxury significantly. We expect its personality and price to be different from the RC F (IS F is discontinued). Lexus will use a new 10-speed transmission supplied by Aisin in the LC 500. Since no journalist has yet driven the car it is impossible to say what features and benefits the new 10-speed might have. The possibility exists that ten gears may diminish the experience. W have driven cars with nine-speed automatics and good torque and have found that the extra gears do little to enhance the driving pleasure of the car, particularly on-road.

When Lexus offers wheel time in the new LC 500, our priority will be to see how this new transmission feels to a driver expecting a car with a lot of driving pleasure.

Tesla Contemplates A New Strategy for China Retail even As Sales Boom
Jay Leno on Elon Musk & EVs: “I Think He Should Get ... Credit"
END_OF_DOCUMENT_TOKEN_TO_BE_REPLACED