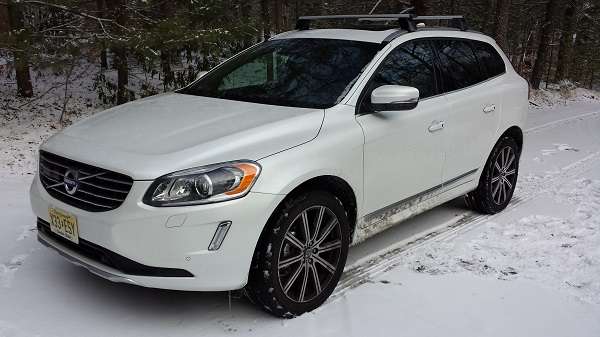 The Volvo XC60 and Range Rover Evoque are perhaps the two best-looking and stylish crossovers on the market. That is where the similarities end. Which is right for you?
Advertisement

There is no loser in this matchup. Both of these premium 5-passenger crossovers have style in spades. The Volvo XC 60 T6 brings safety, power, and Scandinavian design to the comparison. The Range Rover is a sports car mated to an all-terrain vehicle and cleverly hidden in a beautiful body. Let’s take a look at the personalities of these two and see which might tickle your fancy.

2015 Volvo XC60 T5 AWD
The Volvo XC 60 looks larger than it is. It appears to be in the class of vehicles defined by the Lexus RX 350, but inside it is more compact. Up front, passengers are coddled. The seats are not only gorgeous to look at, and wonderful to feel, they are the most comfortable seats of any crossover this tester has ever sat in. You seem to sink into them. Yet, they are also supportive and adjust in all the right ways. The leather of these seats is heated but not ventilated. The dash is right out of IKEA. The waterfall design of the center stack is neat, but oddly it has button-pox. There are buttons everywhere. A strange combination. The dash and the rest of the driver’s space ooze quality and refinement.

There is a nifty key holder slot on the dash under the push-button start. I liked that I my testing. Using it is optional. The car is perfectly happy if you prefer the key be in your pocket. I wish I could say my phone was as happy. There seemed to be no good place to put a smart phone. The controls work fine once the driver adapts to them. However, the four main buttons on the dash are all the exact same size. Many times in my test I reached down while looking forward and instead of getting more heat I got more volume on the audio.

The drive of the 2015 Volvo XC60 T6 is interesting. The ride is much firmer than one would expect. My tester had 20 inch wheels with low profile (45-series) tires. These seemed to be the guilty party. Normally, tires like this sharpen up a ride, but the XC60 seemed to wander a bit. Handling is good, but not great. The steering system seems to be filled with molasses. This is not an insult, the XC60 steers well-enough, but the vehicle seems to be designed to be very mellow. It does not invite you to play.

The power from the 3.0-liter 6-cylinder turbocharged engine was excellent. The XC60 T6 has an abundance of power in every situation. However, fuel economy suffered. My combined fuel economy was just 19 mpg, but the XC60 uses regular unleaded. Kudos to Volvo for that. The EPA rates the XC60 T6 at 17 mpg city, 24 highway, and 20 combined. That is about the same as a 6-cylinder Toyota Highlander from 10 years ago. Volvo realizes this is not acceptable and has vowed to use only 4-cylinder or smaller engines. However, they have not yet made that move on this model.

The 2015 Volvo XC60 T6 is an IIHS Top Safety Pick+ rated vehicle. There is no higher safety level. With an MSRP of $52,225, the Volvo is the lower cost of these two vehicles. However, fuel costs could close that gap.

2015 Range Rover Evoque 5-Door
Like the Volvo XC60, the Range Rover Evoque is a great looking vehicle inside and out. It looks like a Mini and also a Ford Explorer, but right sized rather than tiny or huge. Inside the layout is also simple and elegant like the Volvo. The perforated leather seats are heated and cooled, but they were too small for my frame. The dash is simple, and the infotainment and HVAC controls are all top-notch in terms of simplicity.

The Ranger Rover is smaller than the Volvo but only in the cargo area. Up front and in the back seats the two are very similar in terms of usable space. The Rover is really a tall wagon more than sport-ute. This fits its personality.

To say it bluntly, this Range Rover Evoque is trouble. It begs to be driven hard and fast. Many so-called sports sedans would be embarrassed in a head to head comparison with this crossover. Steering is light and direct. The suspension is a bit firm, but at least you realize the benefits of that firm ride in terms of road-feel. The 2.0-liter turbocharge 4-cylinder engine is one of the best of its type. It develops 240 horsepower, and all of them are usable. The 9-speed transmission is a bit abrupt and also a bit too soon to look for a more fuel efficient gear. It is the Range Rover’s only flaw.

When you are done darting around town or flying down back roads, you can turn left into the woods anytime you like. Or onto dunes, or into a river. This is a Range Rover and on the center stack you can choose where to go and it will adapt. I drove this vehicle in about 18” of water, and it did not miss a beat. During my testing, I also had the chance to drive in snow and ice and the Evoque was superb. I do have to reveal that it was fitted with winter tires. That makes sense, given that it is winter.

The $60,470 Range Rover asks for this Evoque is a bit hard to swallow. This is not a crossover for everyone. However, compared to the Volvo, the $8K difference is not as significant if you factor in that the Range Rover uses about 20% less fuel. Except that it uses premium, so maybe that difference is not such a big deal? The Evoque has not been tested by IIHS, but it does have forward collision prevention and other driver aids. Check the government and IIHS rating before you buy to see if it has been tested.

Conclusion
The Volvo is a safe, comfortable small to mid-size crossover with great looks inside and out. It has a relaxed driving personality. The Range Rover is crazy-fun to drive, fabulous in the looks category, but has unknown safety credentials and sky-high price tag. Which suits you best?