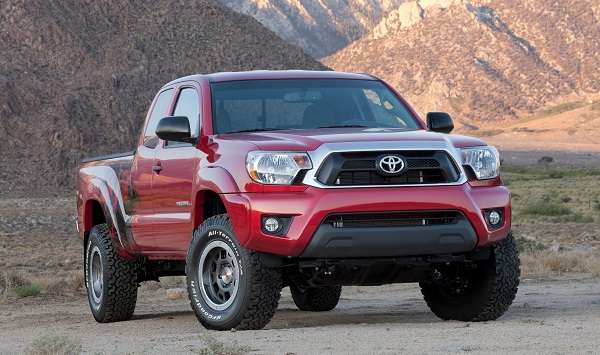 May was the month that both the 2015 Chevrolet Colorado and the 2015 Toyota Tacoma both squared off in a full-capacity sales fight. Chevy and Toyota both had added a third shift to their factories producing the popular mid-sized trucks. Now at their full production capability for the vehicles, Toyota is kicking Chevy’s butt in monthly sales. In June, Toyota extended its sales advantage significantly.

June Sales Tacoma Vs. Colorado
Generally, automakers compare their monthly sales to the same month in the prior year. That evens out any seasonality effects. However, for the 2015 Chevy Colorado there were no sales in June 2014. So we can instead look at the new truck’s monthly sales as a curve. Until last month, that curve was trending up. However, in June Chevy sold just 6,558 Colorados, down about 25% from the 8,881 Colorados Chevy sold in May. This may be the leveling off of that truck’s monthly sales rate, or Chevy may have had some growing pains that prevented more sales due to lack of inventory. The truck has been on sale now for about nine full months, so the capacity issues are becoming less of a factor.

Toyota for its part was also down slightly. In June Toyota sold 15,959 2015 Tacomas. That is down from the 17,520 Tacomas Toyota sold in May. So the Tacoma outsold the Colorado by 2.5 to 1 in June. Toyota’s slight drop in Tacoma sales is not as much of a mystery. The Tundra is built on the same line and sold well in June.

jon doe wrote on July 6, 2015 - 2:01pm Permalink
Toyota can make S&!T, and it will sell like hotcakes. Americans are stuck in the rut and do not do their homework before buying a new vehicle.
socrateos wrote on July 8, 2015 - 1:59pm Permalink
> Americans ... do not do their homework... American automakers do not do their homework to know what American people actually want to BUY.
Steve Benjamin wrote on July 7, 2015 - 9:49am Permalink
I have a 2006 Tacoma X-Runner with over 150,000 miles and it is the best vehicle I have ever owned. I have owned Porsche 911, two BMW's, a Lotus and nothing comes close to the quality of this X-Runner...and it's as fun to drive as the other quality cars...The only thing I have ever done to my X-Runner was replace the alternator at 120,000 miles and that's it....can't say the same for any other car I have owned....and I'm 69 years old...
curt wrote on July 7, 2015 - 5:11pm Permalink
GM stopped talking ordersfor the Colorad mid June. I got the email indicating the 2015 was sold our in terms of factory orders and they would begin 2016 ordersproduction soon. And most trucks available othdealer lots are base model. Not surprised numbers were down .I ordered mine in May
Life tested trucks wrote on March 22, 2017 - 5:34am Permalink
Tacomas are a far cry from the four cylinder trucks of before. Too many hyped this truck. Four cylinder is overworked and the 4.0 v6 offers power, but Toyotas infamous v6 plagues are still an issue. Head gaskets, fuel and oil consumption. Engine needs removal for major service. Most trucks privately sold are a fashion, it does offer more ergonomics and style. (not in my opinion) Toyota makes great transmissions. (Aisin) Most of its popularity is inherited stigma. Followed by more conscious owners who give it maintenance to live up to its reputation. I've owned and own both Toyota and Chevy. I'll take a 5 cylinder Colorado any day. Carried over a ton in the bed and pulled trailers double it weight. Over 1 million miles in three owned. Honestly for work and mileage Chevy, comfort and look Toyota. Nothing like the Toyotas of the 80's. The 22r is historical as the S10's 4.3. It's all a matter of preference and after owning both, Chevrolet gets my hard earned dollars. I work and drive my trucks beyond.
Wpb355 wrote on November 21, 2017 - 6:33am Permalink
Thank you! Not at all,. I’ve owned many cars. Toyota 4 cylinder before Honda. Reliability key. The 22R, 3rz,4age, 2jz. Purchased a Colorado in 2004. At 196k miles the belt tensioner needed replacement. At 212k I put in the Aisin Ar5 and ho tuned. My brother had an X-runner. In 2011 I purchased a reg. cab 2004 5cyl. 5 speed. With codes and clutch issues, out performed his 4.0 6 speed. 0-15-30 3.5 3:42 G80. Now ported heads tuned to 7.5k rpm I love my Toyota’s own two old Corollas.